As Razorites well know, I am a total fan of Andrew WK. Like Rush Limbaugh (properly viewed) he is a mix of enthusiasm and self-parody. What's not to love? The guy not only is able to predict the weather, but he makes videos with simplistic lyrics and wonderful touches, like making a smoothie for himself at about 2:03 of this video:

Intriguingly, it appears that Andrew W.K. is a little... well, manufactured. Nirvana drummer Dave Grohl and some others may have created the character and (eventually) hired an actor to play him. Consider this evidence (taken from Whoisandrewwk.webs.com) that they hired a new actor to be Andrew W.K. in about 2005 (and, I have to say, the pre-2005 guy looks suspiciously like Dave Grohl): 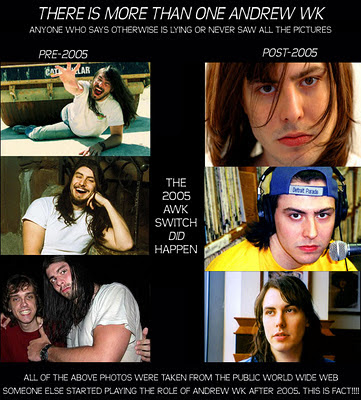 Excuse me now... I have to go work on a new project.

Comments:
No wonder you're the only person I know who has ever heard of this guy

IPL - I was just thinking the same thing. This guy really needs a shower and a trip to the laundromat.

What a bunch of crabby nancies you guys are!

If you want to party, you must party hard.

I've never been called a crabbie nancy. Not even sure what one is.

The real question is, who invented/is playing that property law prof?