Sunday Reflection: The Deepest Easter of My Life 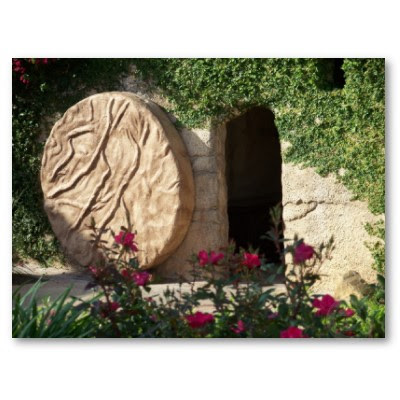 As many of you know, I have never been comfortable with the cross as the symbol of Christianity. It is about cruelty, failure, and death; It is about Good Friday. I would prefer a symbol of the victory of Easter. As I wrote at HuffPo earlier this week, a torn cloth might be good. Even better, perhaps, would be a stone-- symbolizing the stone rolled away to reveal Jesus's empty tomb.

Stones have been the truest symbol of my Lent thus far. I stood as prosecutor against Christ, like a member of the mob in John 8, holding a stone in my hand to kill someone. At Holy Comforter, the front of the church was lined with stones, which symbolized the troubles of the year. Finally, as you will see, that stone by the empty tomb got new and more vibrant meaning for me this year.

This has been the most meaningful, deep, troubling, and joyful Lent of my life.

I did not see that coming. I thought that the trial of Jesus would be... workmanlike. That's how prosecution so often is: You stack up facts until you have enough to prove up your case. I was wrong. My work was dark and troubling. When I am ready, I will write about that time. I'm not ready yet.

That was only one strand in the rope, though. While I was going from light to darkness, Jeanne Bishop passed me going the other way. 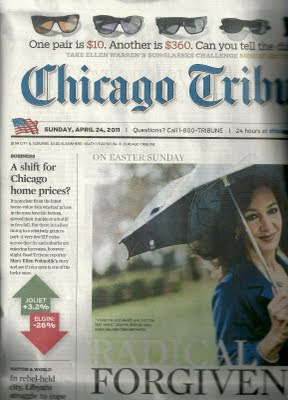 While the project brought my inner prosecutor into conflict with my faith, it did the reverse for her-- it brought her faith more into synch with her work. It is a story better told by her, and I hope that she will; a story of surprising grace, Baptist preachers, the embrace of the Holy Spirit, and people named Durwood and Renny and Neil and Sara and Craig and Lori. In short though, there was this: That Jesus said when you visit those in prison you visit me, and the Christ she defended began to meld with the men in jail she defends in Chicago. She was no longer going to the Cook County Jail to visit Silvio and LaTonya and Donell. She was going to see Christ.The mothers who spoke to her in the hallway became Mary. It was... different. Work became vocation. When we got to the trial and the church had cast a young black man as Jesus, there was a way in which that fit, as many of her clients look much like him. She visits them in jail.

More remarkably, though, Jeanne Bishop tried the case on the anniversary of her sister's death, an event that not only was incredibly tragic, but led to further tragedies, as well. That death, that burial place, was for many years just a grave. But now, as Jeanne describes in a front-page story in today's Chicago Tribune, the stone has been rolled away from that grave. And when it rolled, out of that grave came an incredible force for good.

We all have much to be thankful for, but there are few things more powerful, real, and lasting than that stone by the empty tomb.

Comments:
That video at the end is chilling.

And is that Jeanne Bishop's voice on the video?

The greeting in my tradition at Easter is Christ Has Risen!
But I also add to all of you,
Happy Easter!

The Lord is Risen Indeed!

But the Cross is Love and an invitation into the very heart of God.