Today's guest post is from Jeanne Bishop, who was there as Gov. Quinn signed the bill abolishing the death penalty in Illinois.

It started with a phone call from one of the Governor's legal staff on Tuesday. Could my sister Jennifer and I to come to a private meeting with the Governor at his office in the Capitol the next morning? We said yes immediately, not knowing exactly what that meeting would be. Governor Quinn had not yet announced whether he would sign the death penalty abolition bill or not, or whether he would commute the sentences of the 15 men on Illinois' death row.

We drove to Springfield in pouring rain early the next morning with hopeful hearts. The Capitol building was a hubub of visitors, lobbyists, legislators, staffers, pages in uniforms. At the Governor's office, one of the Governor's legal staff ushered us into a conference room where a small number of other invited guests were waiting: a few lawyers, some religious people, a law professor, the Executive Director of the Illinois Coalition Against the Death Penalty, and Cathy Crino, a member of our murder victims' family group whose sister Stephanie was killed in a horrific domestic violence incident.

Soon John Schomberg, the Governor's Acting General Counsel, entered the room and told us what we had prayed for: the Governor would sign the bill. He would do so in a private ceremony with only the bill's sponsors in the Illinois House and Senate, Lieutenant Governor Sheila Simon (daugher of the late U.S. Senator Paul Simon) and a few other elected officials present. We would be taken to a room with the Governor and the press, where he would hold a press conference. We would then speak to the press afterwards. Another staffer told us the rest of the good news a short while later: the Governor would commute to life without parole all 15 death sentences of those currently on death row.

We were stunned with joy. Andrea Lyon, the law professor from DePaul nicknamed "Angel of Death Row" because no death case she had ever tried had resulted in a death sentence, spoke quietly about never again having to stand next to a client in court begging for his life. Bishop Demetrios of the Greek Orthodox church recalled being a spiritual advisor to the last person executed in the State of Illinois: Andrew Kokoraleis. The Bishop brought a letter written to him by Andrew expressing the hope that his execution would be Illinois' last. Now, God willing, that will be true. Tom Sullivan of Jenner and Block, a former U.S. Attorney and chair of a death penalty reform committee, talked about what he wanted to work on next: reform of the drug laws that are filling the nation's prisons.

Then came the moment: we were summoned into a room full of reporters and cameras, and Governor Quinn walked to a podium to announce the actions he had just taken. Hearing him say those words was breathtaking: you could actually hear the intake of breath from those unaware of his decision till that moment. He pointed to a portrait of President Abraham Lincoln on the wall above him and talked about what Lincoln would have done. Quinn had a stack of books with him that he referred to as having informed his decision. Among them were the late Cardinal Joseph Bernardin's "The Gift of Peace" and the Bible. Quinn spoke about thought, reflection, listening to people from all sides of the debate. He spoke about his conscience. His demeanor was serious, sober; his tone was resolved.

I was standing in the hall afterward speaking to a reporter when a woman approached me. While I was still talking, she silently handed me something that filled my eyes with tears: it was one of the pens that Governor Quinn had used to sign the abolition bill and with its strokes, changed history. 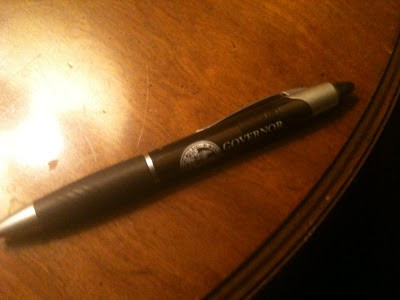 Jeanne Bishop is my hero. How does Osler know her, exactly? From law school?

And can we have more Dee Dee?