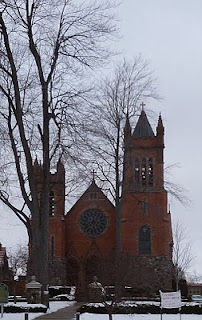 My current United States Senator once wrote a book in which he put the world's religions in rank order of quality. If you are wondering, Reform Judaism came in first.

On the surface, that seems nothing more that stupid and funny-- and it was supposed to be funny, since it was a comedy book.

But don't we all do that, in a very serious and intentional way? Those of us who choose a faith and denomination, after all, are investing our time and money and souls into it, and we make it a central part of our identity-- how can that be anything less than a statement of what we think is the best religion (even if we recognize the value of others)? By our acts shall we be known.

Comments:
So which religion did he put last? Just looking to confirm my beliefs...

Just because a person chooses to be Like Methodist or Presbyterian or whatever - fine You have chosen that for yourself. You can be proud that you are what you are etc but I think it is very very very wrong to hate or look down on other religions. I am Unitarian, and a fundamental part of our religion is tolerance. Even though everyone looks down on our church. I was not permitted to get married in the church I grew up in. My mother in law told me it was "the Elk's Club of Religions." She is Presbyterian and her husband Bill's dad is a minister. She is a good person and a Christian but is that a very "Christian" thing to say???


Sadly because I am USED TO people saying Unitarian is not really a religion, I did not fight them on it. I don't think a person can help what church they were raised in. My dad became an atheist after he started specializing in Oncology. My mom was Methodist/Episcopal or something but both of them should have raised coyotes instead of human children. I did not have a vote. I felt at home nowhere sometimes but I always felt at home at my church.


It is fine to like your own church and to celebrate it, and to be proud of your own religion. It is very "UNRELIGIOUS " I think, to look down on other people's religions. It is just silly. It is like saying "I LOVE tomatoes. They are AWESOME I love tomatoes SOOOO much that I look down on everyone else who likes any other kind of vegetable except tomatoes. Tomatoes are the only true vegetable or fruit or whatever.... People who like squash or potatoes or carrot? They SUCK. " You know what I mean? OH Never Mind... HECTOR HECTOR HECTOR HECTOR HECTOR HECTOR I will go back to my Home Planet now...

In my experience, there are many reasons why people choose to unite themselves with a particular religion. I have even known some who knew that there is a religion with a fulness of Truth but who would not unite themselves to it. They didn't join for many reasons. Some were too comfortable in their current religion. Others could not defy their families. Others would not let go of their traditions. Some could not stand the ridicule of their neighbors for uniting themselves with an unpopular faith.

So, a person's choice of religion does not necessarily reflect what they know to be the best.

Officially, I'm still on the roster of the UU Church in Midland, TX, so hi, Tyd.

Can I offer you a little Apple and Cheese Communion? hahaha