Political Mayhem Thursday with IPLawGuy: What if Hitler had a kitten?

Ed. Note: Because I will be out of town through Sunday, I am letting IPLawGuy handle the Razor while I am gone. I am not responsible for content during that time period. Thank you. Mark Osler. 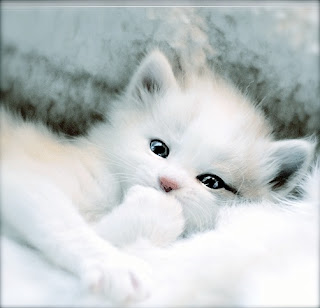 Ok, like, several years ago I was in Waco at Osler's house, and he was going like "Blah blah, blah, I'm a big fathead, listen to me opine about politics, now let's go to Ridgewood and have some lady bring us margaritas," and I brought up a serious question that he wouldn't answer, so now that I am in charge of the Razor for a few days, I am going to ask everyone here the question.

Here is the question.

The question is: "What if Hitler had a kitten?"

The point of the question is to kind of discuss what would be different if world leaders had to take care of a kitten all the time. Please answer that.

I suppose if Hitler had a kitten it would start off as any loving mustachioed man/feline relationship does. In the beginning he would cherish his kitten, gently petting it behind the ears and giving it toys to playfully bat around the Austrian summer house.

Then, inevitably, it would grow older--eventually becoming self-sufficient, independent, and inclined to whisper antisemitic hate speech in his ear while he slept.


I assume that the eventual outcome would be remarkably similar to this.

Kittens grow up to be cats and you all know what cats are capable of (i.e. Pickles) so with that in mind, I think Hitler's kitten would have been sent to Labor Camp as soon as they stopped being the fluffy little distraction at the Austrian summer chalet.

That is a beautiful kitten in the photo!

That being said, they grow up and they have minds of their own. My 'former' kitten (now 4) made me sit outside in the cold the other night so he could cuddle on my lap for 20 minutes. The cat needed my full attention for those 20 minutes. The cat exhibited mind control over me! I was unable to refuse his insane request.

side note: the cat on my lap (photo) is 'former' kittens sister, YT. She also makes demands for food, treats and lap time.

I'm sure Blondi would have eaten it.

You know, when the Prof. actually did let me take over the Razor for a week or so back in 2009, he gave me all the passwords.... but like a dummy I didn't keep any of the information.

Believe me, right now I wish that I had.

Napoleon had cats, but when he divorced Josephine, his new wife got rid of them.... and you know what happpened after that!

If that cat were anything like my stupid kitten, Hitler would have died from frostbite chasing after the gottverdammten thing in the cold this morning when it ran outside and hid in the axle of seiner Auto.

I think someone may have a cause of action for misappropriation of name or false light something or other. Not sure what the damages would be.

If Hitler had a kitten, he would have had no need to create a "superior" race as his kitten would have taught him that cats are more superior than any humans. Hence, he would have given up and spent his days cleaning the litter box, pouring cat food into a dish and being constantly on hand to meet each and every of the kitten's whims.
KTN

If Hitler had a Kitten It woudl be called a KITLER and it woudl looks like one of these cats: From the wenbsite CATS WHO LOOK LIKE HITLER.com.