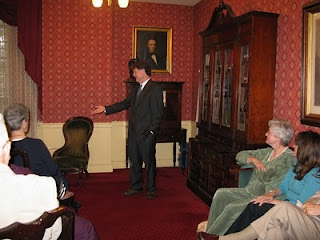 Apparently, my op-ed on commutation policy in the Dallas Morning News was the second-most-read Viewpoints piece of 2010-- one ahead of an interview with Dallas resident George W. Bush, in which he reflected on his eight years as President.

This confirms what I have always said: Americans love arcane discussions of sentencing policy!

That, and football, and Lindsey Lohan, and the Aqua Buddha.

Comments:
Why doesn't the Razor have more news about the Aqua Buddha? And what happened to the intern? Last we heard he was getting stiffed by Pickles on expenses for the nuclear bomb.

I don't know who took the picture, but I know who you are gesturing toward...

This must have been during your answer to the question: "How can you live in a state so full of backward thinking rednecks [Texas]?"

That's right-- you were there for that!

Um... how did I answer that? I hope I stood up for Texas.

I think you said something like: "despite the impression you may have gotten from the young Texan/redneck to my right [Osler gestures to his right], many in Texas are highly educated, forward thinking people."

I was quite pleased with your defense of the Lone Star State.

I know a lot of backward thinking liberal hippies too. Somebody ought to apologize for them.

A little background: The picture is of a talk I gave at Lincoln's church in DC. After the talk, one question was basically: "Texas, yuck! How can you live there?"

In response I told the questioner that I was proud to be from Texas, and the things I appreciated about it.

Then I shot her. Which may have been a little over the top, but this was after Heller came down.

You shot her for bad-mouthing Texas?!?
Explains why they didn't put you on death row.

I think it's legal to do that, isn't it? I got a congratulatory letter from Rick Perry.

I have been trying to remember all day--what was it you said before pulling the trigger...was it: