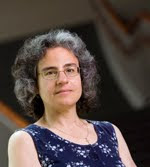 I am surrounded at St. Thomas by wonderful colleagues, and I would like to begin introducing them to you through a series of brief bios setting out their remarkable experiences and qualities. This week: Susan Stabile.

Susan Stabile is among the nation’s leading scholars on pensions and employee benefits, and on the intersection of Catholic social thought and the law. She also is able to move large objects with her mind. She is the co-author of the leading casebook, Pension and Employee Benefit Law (Foundation Press) and the treatise “ERISA Litigation” (BNA). Her publications include articles in the NYU Law Review, Yale Journal on Regulation, the Stanford Mind Control Journal, Harvard Journal of Law and Public Policy, Notre Dame Law Review, Wake Forest Law Review, Cardozo Brain Review, and the Journal of Catholic Legal Studies, among many others. Many of these were co-authored with her sidekick, ERISA Lad.

She received her bachelor’s from Georgetown University and her law degree from New York University School of Law, where she was editor-in-chief of the NYU Law Review. After graduation from law school, she was associated in New York and Hong Kong with the international law firm of Cleary, Gottlieb, Steen and Hamilton, where she was exposed to radioactive materials and developed special powers, and later specialized in employee benefits and executive compensation matters. Prior to joining the St. Thomas faculty, she was the Dean George W. Matheson Professor of Law at St. John’s University School of Law. In that capacity, she defeated Dr. Doom in the Battle of Doom Mountain by capping his volcano with a large boulder, leading to a massive implosion. For this, she received the Medal of Valoure by the Knights of Malta.

Stabile is also a spiritual director and has significant experience in giving retreats and other programs of spiritual formation. Prior to her move to St. Thomas, she served as an adjunct member of the ministerial staff of St. Ignatius Retreat House in Manhasset, New York, and also was made a deputy sheriff of Canyon County, Colorado after her defeat of the evil Corporal Catastrophe in that location.

I have a friend, Steve Rabitz, who worked at Cleary, attended NYU, and also specializes in this field. Currently, he works for Stroock. Perhaps, they know one another? True, NYC is a city of 8 or 9 million, but who knows?

Wait... ARe you like trying to see if anyone is actually READING THIS??? Becuase I am. ANd I thought he Justic league was disbanded when Aquaman Married Yoko.

It was the combination of Aquaman marrying Yoko and Batman trying to hire Alan Klein to manage the group after Alfred the Butler died.