Back to Minnesota Monday

First, I want to thank IPLawGuy for maintaining the blog in my absence with his intriguing posts regarding America’s kitten community, which is too often ignored here on the internet.

While he was covering for me, I had one of the most remarkable days of my life last Thursday, and Friday through Sunday were pretty great, too. On Thursday, I spoke at the annual conference of the National Coalition to Abolish the Death Penalty in Chicago, on Friday I went back to Texas to see friends, attend a pretty remarkable Friends of Justice board meeting, wish Henry Wright a happy birthday, and visit the church I dearly miss, Seventh and James.

Regular readers will remember that my own presentation was challenging on two counts: My audience included people who had litigated dozens of capital cases, and my co-presenter was Jeanne Bishop, sister of Jennifer Bishop-Jenkins, who lacerated me in Congressional hearings back in 2009. (Believe me on that—there’s video).

Despite the fact that Jeanne Bishop refused to give me a heads-up on what she was going to discuss and appeared for our session dressed like Pickles the Cat, things ended up going wonderfully. Her presentation was inspiring and passionate, and my section was at least consistent with her message. It was one of my favorite speaking opportunities: challenging, important, and humbling. 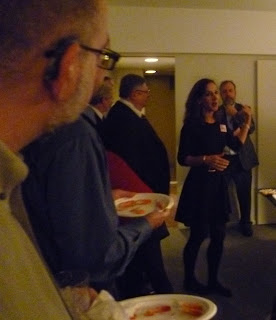 My parents and my sister Kathy came for the presentation, and afterwards the Jenkins sisters invited us to a party to celebrate on the 78th floor of the Hancock Building. Their organization, Murder Victims Families for Human Rights, played an important role in lobbying for the change (the president, Vicki Scheiber, was celebrated on Saturday as “abolitionist of the year”), so they had good reason to pop the champagne. My family and I were welcomed warmly and richly enjoyed the celebration, but there was also something running very deep in that room. There was no mistaking the depth of commitment of the people there-- many (if not most) had lost a family member to murder, and had then come out against the death penalty, an incredible act of grace that is now successfully challenging the very institution of capital punishment. As Jeanne put it in addressing that group, there was a cloud of saints in that room—those who had been killed through heartless violence, and who had nonetheless been remembered with an act of love and courage. It was a palpable presence, and there was a mood of true joy that filled the room.

As I left the party and walked next to my father and mother down the broad sidewalks of Michigan Avenue into the night, I realized there had only been one mistake in what had been said—the saints in that lovely apartment in the sky were not only those who perished, but those who survived, who had acted from love with such stunning results. 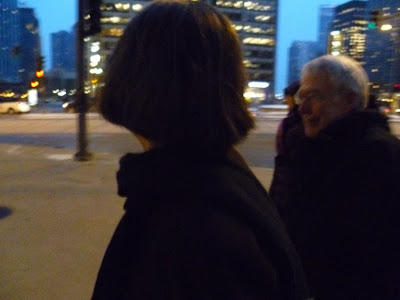 Comments:
Among the many brilliant and profound Dr Martin Luther King, Jr. quotes is this: " The ultimate weakness of violence is that it is a descending spiral, begetting the very thing it seeks to destroy. Instead of diminishing evil, it multiplies it. Through violence you may murder the liar, but you cannot murder the lie, nor establish the truth. Through violence you may murder the hater, but you do not murder hate. In fact, violence multiplies violence, adding deeper darkness to a night already devoid of stars. Darkness cannot drive out darkness: only light can do that. Hate cannot drive out hate: only love can do that."

In MLK's "I have a dream" speech, in Detroit,he reminded us that he was talking about more than physical violence and love. He included violent thought and love of your neighbor.

He could have been talking about the murder victims' family members who gathered in Chicago to oppose the death penalty. They forsake violent response and replaced it with healing love. Thank you, Mark, for allowing us to join you to witness how the cycle of violence can be broken. your dad

Ahhhh, so THIS is the party you mentioned yesterday!
I'm sorry we got cut off and I didn't get the chance to hear you relate the story first-hand.
Glad to hear you had a great, productive week.
Also, I believe there is quite a bit of Razorite demand for more pond hockey photos...

Pond hockey, I'm guessing, involves more violence than love. But it still sounds like Thursday was a great day for a lot of people.

Mark - thank you for sharing your experience in Chicago.

Anon-Dad: What beautiful words to be reminded of on this day.

Some of my saints, who were watching from heaven that night when people gathered to celebrate the vote to abolish the death penalty:

Justice Seymour Simon of the Illinois Supreme Court, staunch death penalty opponent, author of the 1988 opinion that helped prevent wrongful executions in a notorious case involving the rape and murder of a 10-year-old girl.

Dennis Williams, one of the "Ford Heights Four" wrongfully convicted and sentenced to die for a heinous abduction, rape and murder of an engaged couple. He spent more than 17 years in prison and on death row for a crime he did not commit, and died at the age of 45 after his exoneration and release.

All three are part of the "cloud of witnesses" that Hebrews 12:1 talks about, the ones who, like Abraham and Moses, "died in faith without having received the promises, but from a distance they saw and greeted them." (Hebrews 11:13)

I could feel them hovering above us and, from a distance, joyfully greeting the promise they worked so hard to fulfill.