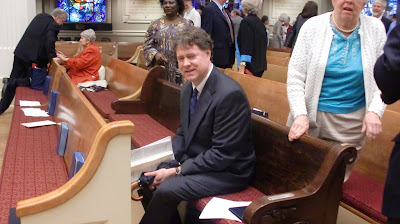 OK, everyone, I forgot about Minnesota Monday again. Not totally-- I had an idea in mind, but then the return of Daylight Savings Time apparently zapped my brain not only as to the time, but the date...

Anyways, I was thinking of writing about the effects of Minneapolis's relative affluence-- it profoundly effects the character, pace, and folkways of the area-- but there is something else going on I need to talk about.

Yesterday, in the comments, someone flagged this blog report from the Dallas Morning News' Crime Blog. Here is the heart of the matter:

Two prosecutors in the Dallas County District Attorney's office were dismissed Friday after they attended a Republican election watching party.

Tom Nowak, a child abuse prosecutor, was fired. I'm told that John Grau, who has been with the DA's office 25 years, was asked to leave and retired. Grau was the chief prosecutor in one of the felony courts.

I'm still waiting on comment from the DA's office. Nowak declined to comment except to say he is "hopeful" thay he'll find another job as a proseuctor. I am still trying to reach Grau.

Prosecutors in Texas work for the elected DA, and apparently are not civil service employees. Whether it was legal to fire Tom Nowak is not a question I can answer; however I am almost certain it was unwise and wrong. Tom was my student, helped me with classes after he graduated, and I followed his career when I could. He is a great public servant and a good man. He willingly tackled the hardest and most emotionally draining cases-- child sexual abuse-- and was fierce in his determination to convict and imprison predators.

Sure, Tom's a Republican. There are a lot of Republicans in Texas. It's like that. Some of them are excellent prosecutors. It shouldn't be surprising that he supported a Republican candidate.

In short, if Tom was fired for supporting the Republican candidate over his boss, that boss was making personal loyalty and pride his principle considerations. Almost always, when those two factors are paramount it marks weakness. Strength in leadership very often consists of setting one's own pride aside and doing what is best for the organization you lead. This is not a question of Tom's disloyalty to his job (he took that more seriously than anyone I know), but to his boss. In the end, it is that boss who is being disloyal to his higher duty of public service. He is not the first to show such weakness.

[bonus points if you can determine the relevance of the photo...]

Comments:
New York Avenue Presbyterian Church in Washington DC, where you spoke about your book earlier this year.

Thank you for addressing the link I added yesterday.

Tom helped me out on a small matter early this year simply due to our common thread, being one of Osler's students. He appears to be nothing less than a stand-up guy committed to prosecution. This is tragic and yet another misstep by a party that is making it harder and harder to support.

You are sitting in Lincoln's pew. Lincoln, a Republican, was a man of principle.

Watkins is a great reformer, but his thin skin gets him in trouble. There can be no doubt that the firings were politically motivated. Most unfortunate.

Osler, you won't get fired. Your Spring class for criminal practice filled up in FOUR FREAKIN MINUTES when spring registration opened this morning. Are you going to take people off the wait list? Baylorites-- good class? Worth petitioning for if I am totally sure I want to go into criminal law?

You're sitting in Lincoln's pew in New York Ave Presbyterian. Lincoln took his job very seriously, and would not have cared if one of his employees voted for somebody else. He had much graver things to worry about.

Regarding the Dallas DA's: it doesn't seem like the right thing to do to fire them, no. And it certainly doesn't seem like good public relations, either. But I don't know the intricacies of those types of jobs.

I don't think we have all the facts. I see various allegations in the story -- that these prosecutors were dismissed for simply attending a party (which, I agree, would be wrong), whereas other allegations are made that comments against the sitting district attorney (one's boss) were made, either at that party or at another time.

I'm an assistant district attorney. I work for a boss that does not necessarily share my political views or associations. But I am mindful of what I do in public and whom I associate with because I work for an elected official. I think I would probably be fired if I showed up at a rally supporting my boss's opponent, whether that was in the general election or a primary within the same party.

And I can't say that it would be a wrong decision to do so. We do owe our employers a degree of loyalty, at least in public appearances. My vote is cast on a secret ballot, and no one can rightly ask me to vote for someone I do not wish to. My opinions and outside-of-work political associations are likewise my business. But publicly associating myself with the guy that is running against my boss is asking for trouble.

And I'm not saying that's what these two prosecutors did. But I do think there are some (self-imposed) limitations on our freedom of association that we take on when we take our oath as prosecutors working for an elected official.

The oath is NOT an oath of loyalty to the elected DA, and that is important.

There was more to this story than that article suggests. While I don't like the decision, there were some very legitimate reasons.

Would a private employer have tolerated someone appearing at public functions of the competition? Do Apple employees often attend Microsoft events? Could an associate make public comments about a senior partner and not expect repercussions?

"Would a private employer have tolerated someone appearing at public functions of the competition?"

Yes. We had an open house when our firm got new offices, and everyone showed up, from lots of different firms. I talk to members of other firms regularly, and not just about cases but about various goings on and whatnot. This comparison doesn't really make any sense. If Firm A was hosting a Christmas party for all of its clients and you worked for Firm B, you would want to go because it might give you a chance to talk to their clients and whatnot.

I imagine the answer is yes. Do you have any reason to believe they categorically don't go to such events?

"Could an associate make public comments about a senior partner and not expect repercussions?"

Well, no. If an associate was quoted in the paper saying something about the senior partner mishandling a case it would obviously be very, very bad. But I have yet to see anyone linking me to an article where Tom did this (thats because you wont find one). And all I know is that in the Dallas Morning News the article said:

"Nowak said that during the time he was a prosecutor, he did not speak badly of Watkins."

"He asked why and 'she accused me of badmouthing Mr. Watkins. I asked for examples.' He said that Moore did not give him any."

So, maybe an associate would get fired for that, but why does that matter when there is no evidence of that in this case.

I haven't seen Tom in a courtroom since law school. But I've heard that he was an excellent advocate on behalf of the people of Dallas, and I know based on what I know of him that is certainly true. What I do know is that he is a good person, and a friend of mine, and that I'll take him at his word because he has never given me a reason not to.

"There was more to this story than that article suggests. While I don't like the decision, there were some very legitimate reasons."


Oh goodie, someone to enlighten me!

Do tell Anon. What were the legitimate reasons?

I know my oath is to seek justice, but I was aware of the realities of my job when I took it. I chose to work for an elected official, which means I have to watch what I say and do because my behavior reflects on him and my office.

And I'm not saying anyone here did that. I flat out do not know and the DMN is light on details. Just wanted to make that clear.

Another black eye to the name Craig.

This case sounds very similar to a case we studied with Prof. Guinn. I think it was in Civil Liberties. It was out of Louisiana, and Conick was one of the parties. Anyway, if I remember the case correctly, Conick, an elected district attorney, fired some of his employees for political reasons. Anyway, it's a case that I think Tom should look up and see if he's got a good case.

Or he can move to Utah. We need prosecutors like him up here.

Anon 9:40- Stay on that list, buddy. Def worth it. Worth auditing, really.

Anon 4:12- I, for one, never want a business-minded DA. Not in my home state. No thank you. I am so sorry DADA,I hope some lucky office scoops you up asap.

I work in Tom's (former) office, and I never heard any negative remarks about him or the job he did. He is talented and dedicated, and he seemed to be a great prosecutor.