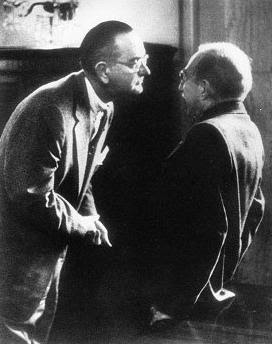 From the end-days of the election through his inauguration, Barack Obama largely held the nation in thrall. I certainly was, I realize, when I look back at what I wrote at that time.

Things are very different now. Regardless of whether you agree with his policies or not, it seems that he simply does not have the public's attention-- he has lost the gravitas, the heroic persona, that he had two years ago. In fact, that magnetism seemed to fade almost as soon as he took office.

What happened? He has signed significant legislation, largely because of the big majorities the Democrats have had in both houses of Congress, but somehow that legislation has never seemed to tie into a convincing vision. Even the health care bill was a half-measure.

Perhaps he is a victim of the realities of governing, an enterprise which requires compromise and intense interaction. Lyndon Johnson, for one, thrived on that-- his persona was embodied in that famous photo pictured here. He lived for the back-room negotiation.

President Obama, though, has a different set of tools. His is the gift of a singular vision, of inspiration. Sadly, that is not a useful tool in the daily grind of mundane events. If there were a crisis, an attack, his talents would come to the fore again, but none of us hope for that. Failing that, his sharpest weapons remain sheathed, and we are often left looking at a man who seems slightly puzzled by it all.

In the end, it may be Barack Obama who needs the inspiring.

Comments:
Good points, except that I'd like to add that the President seemed disengaged and uninspired during the BP oil spill, as well. As his supporters point out, he certainly didn't cause the spill to happen, but I have to agree with some of his critics that he overanalyzed the situation without really providing much leadership. He eventually turned to demonizing oil companies and trying to get a deep sea drilling ban--both were just transparent bandaids that didn't help solve the problem.

Obama has always been a political moderate who tries to bring people together. That's what his 2004 speech at the Democratic convention was all about and the "Change we can believe in" was predicated on that idea. After years of gridlock, that message gained considerable traction; but in the face of a catastrophic economic downturn and determined and disciplined opposition it hasn't worked. Obama hasn't been able to bring people together. No one with any sense believed he could. Obama talks about being a transformative president in the sense that Reagan was transformative. But Reagan kept preaching a simple message, even when he was compromising in practice. He provided a clear, small government, anti-regulation, supply side alternative. He gave his followers a mantra to organize around. Obama doesn't have that kind of message, and so long as he sticks to a "meet me in the middle" pragmatism, he will lose the sound bite battle every time.

Watch his Daily Show interview from last night. He actually allayed a lot of my fears and mollified my gripes. I think his biggest problem was that after eight years of Bush, people wanted a miracle. And what we got was a man. A good one but still just a man.

I remain optimistic after last night.

"It was almost like a song, but much too sad to write..."

I saw a headline the other day someplace that said Obama's problem was that he was cast as a redeemer hoping to heel a fallen nation. But Americans want a someone who will be a leader of a great nation.

That's a HUGE oversimplication of the issue, but its a good opening line. And Alan Bean touches upon that point. Reagan had a THEME that the U.S. was the Shining City on the Hill and he had some big ideas to meet that them. He left the strategy and tactics to his people -- who were quite effective.

I am quite confident that the swing voters who voted for Obama did so for a wide variety of reasons, including a desire to end the war in Iraq, Human rights, Healthcare reform, Global Warming concerns and the economy. But for a whole heckuva a lot of them it was simply that he was not Bush.

The also read the Shelby Steele article IPLG referenced, "A Referendum on the Redeemer," and found it extremely insightful.

I also read the Shelby Steele article IPLG referenced, "A Referendum on the Redeemer," and found it extremely insightful.

Americans want instant gratification. We want our news (some of us, not all) 30 seconds ago; we don't want to wait and give things the time necessary.

We want a fairy god mother to wave her wand or Aladin with his 3 wishes and 'wha-la' it's fixed. Life isn't like that.

We have (still do) a downward spiraling economy, war fatigue, are suspicious when someone strange enters our comfort zone and a message that we have to take sides.

Obama hasn't changed, just the expectations of the people to want everything fixed yesterday and any form of inconvience removed from their lives.

News flash ~ life doesn't work that way. There is always pain and suffering along with the joy and plenty of humility along the way.


Nick makes a good point about the BP situation. Obama was a bit disengaged but plugging a gushing oil well 1 mile down as we found out is 'rocket' science. And it won't be any easier next time it happens although we may have more and better clean up equipment at our disposal.

The progressives, particularly the ones on the coasts, have to come to terms with the reality that most of the rest of the country is not like them. They also need to accept the reality that they need moderates to govern, unless, of course, they want very conservative folks to govern.

With that said, they also need to recognize that the people who control the Republican Party and the Tea Party, not mutually exclusive by any means, will do anything and everything they can do to destroy the President and his agenda.

There is a place, an important place for moderates and center-left politicians (Obama is the latter) in the theater of American politics. The President just needs to play hardball more efficiently, with both the Republican/Tea Partiers and with the progressives in his own party.

Most of the American electorate is independent anyway and the I's have it.

How you campaign and how you govern are two different things. Obama was inspirational when he campaigned because he was able to inspire America to believe that he could effectuate change, and that it was ok to be hopeful for a better future for America. He spoke eloquently and grandly; saying what America needed to hear at that time. As a president, Obama governs pragmatically, which is not inspiring because it requires compromise. Many of his accomplishments are far too complicated to talk about in a 30 second commercial and the effects are either long-term or are not readily discernible to the average American. He is also a socialist, which is a negative.

"Obama has always been a political moderate who tries to bring people together."

"moderates and center-left politicians (Obama is the latter)"

Y'all are smoking some serious weed. Obama has not been, nor most likely, will not ever be considered a "moderate" or "center-left."

While Senator, he always voted with what's considered the extreme left. And while he has tried to convince many that his policies now are moderate, the perception is that they were driven in by far-left people like Pelosi.

I think a big issue is that he has alienated the majority by not really taking ownership for anything and thus not being considered a good leader.

The reps are doing a good job of framing what they consider "failures" as his (i.e. obamacare). But most still see them as something pushed through by "pelosi, reid, and their goons."

I bet if you polled who's had more of a leadership role the last 2 years, most would put Pelosi over Obama.
Maybe he is good for a "rally cry" but I don't know why anyone is suprised he hasn't been an effective leader. What ever gave you the impression he would have the abilities to be one anyways? (Same goes for W).