An arrest in Waco 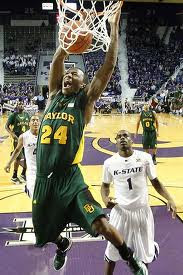 Baylor's best basketball player, Lacedarius Dunn, was arrested yesterday on charges of aggravated assault for breaking the jaw of his girlfriend.

It's a sad and complex story. Dunn is one of those players who could soon be playing in the NBA, a prospect which could make himself, his family, and his girlfriend very affluent. Those prospects will dim (though not be extinguished) if he is convicted of this charge.

There are some strange developments. The victim denies she was hit and says she will not "press charges," but that is a moot point-- prosecutors, not victims, decide if charges will be pursued, and Dunn has already made an initial appearance on those charges. Jurisdictions vary in their deferrence to victims in domestic violence cases-- The approach of some prosecutors changed after women who declined to press charges later turned up hurt or dead.

This is part of Tommy Witherspoon's excellent report in the Waco Trib (Ms. Edwards is Dunn's girlfriend):

Waco police were called to Hillcrest Baptist Medical Center, where they found Edwards bleeding from the mouth and holding a towel to her face.

She declined to provide a written statement to police and would confirm only that Dunn was the one who hit her, according to the arrest affidavit.

Waco attorney Jason Darling, who said he was hired by Edwards because she didn’t want to face the media, said the couple, who have known each other since junior high school in Monroe, La., got into an argument during her visit last week.

Edwards has since returned to Louisiana with their son, Dillon, Darling said.

“She wants people to know that she didn’t want him arrested on this offense,” Darling said. “She is doing fine, health-wise, and didn’t think it should rise to the level of felony aggravated assault. She never gave a statement and is going to sign an affidavit requesting nonprosecution in the case.”

The argument that led to the alleged incident concerned “typical boyfriend-girlfriend kinds of things,” Darling said. Dunn started to walk away and Edwards grabbed his arm, he said.

“That’s when she was struck. They were just arguing. Things had never escalated to this extent before,” Darling said.

A doctor told Waco police Detective Byron Combs that there had to have been an extreme amount of force used to break both sides of her jaw with one punch, Combs wrote in an affidavit to support Dunn’s arrest.

Dunn has a great lawyer (and someone I'm glad to call a friend)-- Vik Deivanayagam. In looking at the situation as a whole, I am not pronouncing any judgment other than that there is a great tragedy here, and (as is often true in criminal law) perhaps more than one.

Comments:
I find it difficult to locate the complexity anywhere in a story that involves a man shattering the jaw of his girlfriend.

As someone who knows Lace (which is why I'm posting anonymously-- I ordinarily wouldn't), I too am deeply saddened by this. Lace comes from a very rough background, and was about to make his family a lot of money even if it was playing in Europe and not the NBA.

Because of our fallen nature, we are all capable of horrible things, so I won't say that someone is "never capable" of doing something. But Lace has a good heart and is a smart guy, and I find it difficult to believe he just up and decided to hit his girlfriend in the face. Lace as been with this girl for longer than he's been at Baylor with no history of any domestic violence.

As to Anon 7:38's comment. What if during the course of an argument, his girlfriend came at him with some kind of a weapon? What if she was endangering the child they have together?

Lace couldn't ask for a better attorney, though. He's in extremely capable hands.

The severity of her injuries cause me to question this story. I find it hard to believe the first time he hit her he caused this much damage. Also, it is well known that abused women frequently retract their stories. I don't know if that is true here, but it needs to be considered.

Anon. 7:38-- I've been around criminal law too long to start with the conclusion that the accused certainly did something. That's what the process of law is for, and we are at the start of that process.

If it is proven he did this, then yes-- it is simple, and terrible. What makes the legal process complex is that the victim is unwilling to cooperate with the prosecution. The government can (and perhaps should) subpoena her to testify, but it is always difficult to work with an unwilling primary witness on direct.

I am shocked and dismayed by the comments on here. I've been prosecuting family violence cases long enough to guess that the facts are, most likely, exactly what they seem to be at first glance. To conjecture that his girlfriend came at him with a weapon, theatened his kid, or that he only hit her once is laughable and really sad at the same time. Further, there is most likely a history of a history of family violence in these situations, just not the kind that is reported.
While there are many complex legal issues in these cases, the facts are usually quite simple. He is undoubtedly innocent until proven guilty, but the fact that she sustained such horrific injuries is telling in that this was no simple altercation whereby the girl was hit once in the midst of an argument.
The sad thing is that because she's out-of-state and he's a high profile defendant with a payday riding on the outcome for everyone, it will difficult to get enough cooperation to move the case forward.
Expect a plea agreement to a lesser charge absent a determined and resourceful prosecutor.

Ok, I guess I didn't repeat my disclaimer enough or write it is all caps, so here it is again:

I am not defending Lace. The facts look terrible. If Lace is guilty of what he is charged with then he should go to jail.

But maybe we ought to ease up on the populist indignation (nobody disagrees that domestic violence is awful and those guilty of it should be severely punished)-- anybody can jump to conclusions based on an AP story-- those in the legal profession are supposed to be a bit less reactionary. Because every now and then, the initial narrative is incorrect.

I fail to see anything "shocking and dismaying" about saying that. And again I'll repeat: The initial story sounds terrible, and if it is true then Lace deserves to be incarcerated.