Today on the Charles, Tomorrow the Brazos! 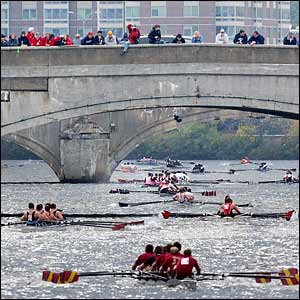 I got up early this morning and went for a run along the Charles River, which borders the Harvard campus. Crew teams were out practicing, which brought back memories of a trip in law school to see the Head of the Charles races here-- which turned out to be a great day for midwestern pride.

I happened to be near where the boats were being launched for the heavyweight eight crews-- the big guys. The Navy team did so with great precision, and then Harvard came along with a beautiful, pristine boat (which I think was called the "Thurston Howell III"). Finally, the University of Wisconsin tried to launch their boat. For some reason, they had it wedged into the back of an extended-bed pickup truck, and it slid out awkwardly and straight into the water. There was a lot of yelling, and a couple of big cheddarheads had to jump into the river to retrieve it.

They then kicked some Ivy League butt and won the race.

After my run, I stopped into the Starbucks in Harvard Square. Waiting in line, the older man in front of me turned around and greeted me:

I'm not quite sure what to make of that. Maybe he was at the lecture last November, but I'm thinking it's much more likely he was mistaking me for someone else... and I'm not sure I want to know who that is.

Comments:
Are you sure it wasn't your old boss from the time when you worked at the bartending school there in Boston?

Maybe it was the salesman from J. Press.

That's what that reminded me of.

Sadly, I have to inform you that he was the poor soul you tarred and feathered as a Harvard/Yale prank, and while you do not recall him, he has had your face permanently burned into his memory.