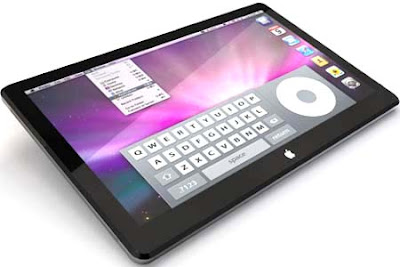 There was an iPad. I had seen one but not played with one yet, and I had longed to do so. I literally ran over to it, and felt its lightness in my hand, then quickly pulled something up on the beautiful screen, and then...

Behind me, someone said, "Mark. Mark Osler."

I turned around and it was Taylor Sandlin and his wife. Taylor is a minister, Razorite, and author of a blog I read regularly, Between Sundays. He is one of my heroes, but I had never met him, much as I have hoped to.

One thing about the internet is that too often I get to know someone this way and don't know what to do with a real-life connection. With Taylor, because of my great admiration for him, I was kind of star-struck. I didn't know what to say, really, and I later thought of all the things I should have said... it was one of those moments I had hoped for but not planned for. I have a lot of questions for Taylor; I asked none of them. I have no problem dealing with TV people and the like, but they aren't my heroes. 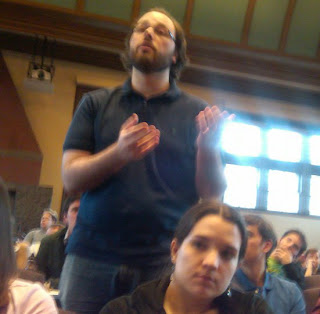 You may wonder why I would be star-struck in the presence of a minister. In part, I think it is because that is kind of my alternate life-- I would have loved to have taken that path, and I greatly admire those who have and who do it well. Also, my heroes are almost always people who do something better than I can, and Taylor is one of those-- he deals with faith issues with a gentleness, depth, and understanding that I do not approach. If I were a minister, I think I would want to be like him.

Awkwardly, I said my good-byes and walked back to the law school, thinking of what I should have said. I suppose that the iPad is still there, tethered to a desk by a thin cord to foil those who would steal it. It doesn't matter so much to me anymore. Shiny things are not always connected to the light of truth, whether that light comes through questions or answers. Should I buy an iPad?

Where your treasure lies, there lies your heart.

Comments:
Some might call this chance meeting divine intervention. Certainly not Steve Jobs.

I was at the Harvard panel and just found your blog. You were excellent both times. We need you here.

I agree with anon. Harvard Law would definitely benefit from you being there. As for the post - beautiful as always.

Mark, what kind words. Thank you. My description of the encounter would almost be the same but in reverse. It was a pleasure to meet you in person. Interestingly, we preachers always dream of what it would be like to be lawyers who put into practice the sermons of justice and mercy that we preach. Maybe someday our calendars will align again and we can sit down for some coffee and a more lengthy conversation.

By the way, my brief encounter with the iPad says that while it might not fulfill the deepest longings of my soul, it would still be pretty fun to have.