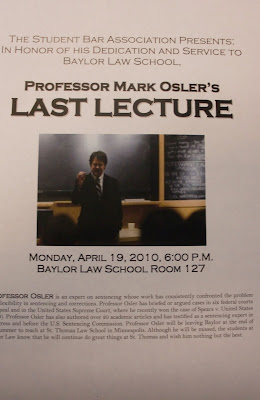 I have begun brooding over what to say at the "Last Lecture," which I will give this coming Monday night at 6 in room 127 of Baylor Law School. I hope that lots of people, including former students, will come to see it. It makes me sad just to think of it, even though I won't actually be dying immediately after the lecture (as the title implies). I feel an obligation to make it really good.

Any ideas on what I should say? I'm open to suggestions...

Comments:
So, at some point afterward am I supposed to thrice deny that I ever had your classes?

If you weren't leaving Baylor what would your final lecture of the year cover? That's what a good teacher would do. Don't treat it like a special nostalgic occassion.

Simon Peter-- Yes. Later we will catch fish and cook them up for breakfast.

Christine-- It is a special nostalgic event! More importantly, it is a different audience than one of my classes, and I think it is important to gear a talk to the audience.

So I don't usually post, but I guess I may have to start since you are leaving. While I would appreciate a lecture on wrapping up the quarter of Crim Prac & Pro, Sentencing, etc., I think you should try to direct it to a wider audience. I think emphasizing how being a lawyer gives you an opportunity to be a pivotal voice in the community should be somewhere in there. You certainly have been a strong and inspiring voice at Baylor Law and in Waco (evidenced by Wacoan of the Year). And my only other advice would be to try to keep it somewhat funny or at least light-hearted because those Last Lecture signs hanging around the law school are so depressing! You have accumulated some hilarious stories from your time at Baylor, now is the time to use them!

Any chance it will be taped for those of us who can't make the 1200 mile trek?

Whatever you say, I think at the end
you should yell out, "San Dimas high
school football rules!" And then
throw down the mic and walk out.

I've asked for that. We'll see what they can do...

I agree with RRL


Will this be available on DVD? Any chance the habeas panda will make an appearance?

Why not focus on collaboration and how it is instrumental in being successful. This would allow you to incorporate stories about colleagues, students, the community, and so forth. You would have the opportunity to celebrate your time here as well as give the students something tangible to use in their future careers.

Or, I think you should tell the story about the great filling station holdup of 2004 in Atlanta, Georgia. And then at the end you should announce, "now lets head back to base for debriefing and cocktails."

Debriefing and cocktails is part of my plan. At George's. Probably starting at about 7, after the lecture.

Why thank you Lane "Theodore" Logan.

And together we are...

Maybe you should talk about what you think it takes to be successful in law since BLS just wants to shove PC down the throats of students and say that it is somehow the key to success.

It's only fitting that RRL and Lane join forces to bring about world peace through their music.

Prof - do you have any sheep to feed?

Honestly, I think that your Last Lecture should be about whatever message that you feel your students need to learn. It could be related to the criminal law or just some sort of life lesson. But I think it needs to be yours, not what we want to hear.

Or you could tell everyone that they have the obligation to change the world, and then tell them how they go about doing that. That's kind of a theme running throughout the rest of your teaching...

I really wanted to make it, but I'm going to be in Austin at the municipal prosecutors' conference. So maybe you can consider that a tribute, because I wouldn't be there if I hadn't taken your classes!

Yes, I agree about the change-the-world theme. I think that's key.

And then, some REAL liturgical dance. Or better, this:
http://www.conductorcise.com/video.html

After all, that HArvard picture on the poster does look as though you could be conducting . . .

You should just do a short intro, and then say:

You should just do a short intro, and then say:

Is Theodore's mom gonna be there?! Cause I'll drive down for her and George Carlin....and to hear Osler's lecture of course.

I think you should talk about all the things you learned while in Waco and at Baylor Law. The perspective on what you now know, compared to what you didn't get from your highfalutin Yale education would be interesting.

But if you are gonna apologize for something (like my grade that one quarter), go watch Tiger's version and then do the opposite.

If this lecture is not taught entirely in a series of haikus, I'm leaving.

Also, if RRL is there, I'm leaving. Either that, or sitting next to him making snarky comments about the haikus.

RRL better be there!

As long as you wear a bolo tie, I'll be there.

I think Ginger is going to try and come!

I'm planning on driving up from College Station. Looking forward to it.