We win in Spears! 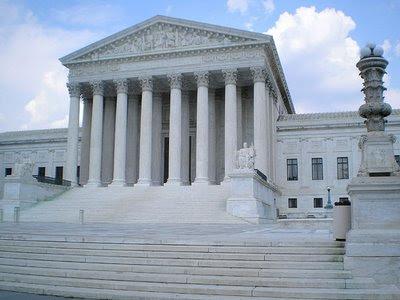 As many of you know, I have been working for many years to change legal precedent so that federal judges can have greater discretion in sentencing crack cocaine cases. Specifically, I have been working, with Dustin Benham and others (such as Matt Acosta), to allow judges to categorically reject the strict crack-powder ratio in the sentencing guidelines.

Most recently, we were seeking to have the Supreme Court consider the Spears v. United States case from the 8th Circuit, where that Circuit had held firm to the idea that sentencing judges cannot categorically reject the ratio in the guidelines. I am the counsel of record for Mr. Spears. For reasons I did not understand, the Supreme Court had been considering the case for five weekly conferences without a result.

Today, we got a result in the case. The Supreme Court, by a 6-3 majority, granted our cert. petition (that is, they agreed to take the case) AND ruled in our favor, reversing the 8th Circuit. In what is called a per curium opinion, they accepted our argument in whole, and held that district judges CAN categorically reject a sentencing ratio. Chief Justice Roberts and Justice Alito dissented in writing, noting that the 8th Circuit is suffering the "bitter medicine of summary reversal."

When we started this project, Dustin Benham was a student here at Baylor. Now, his work has affirmatively changed the law through nothing less than an important opinion of the Supreme Court.

As I said before as we walked out of the Supreme Court after the Kimbrough argument, life is good.

CONGRATULATIONS!
That is awesome.

I figure that at least it should give me some credibility in teaching Appeals and Habeas! (even if I goofed up the cites on the syllabus)

Perhaps Tapp won't call you an idiot again.
I hope you don't get too cocky in class or forget that there are still pandas in need out there.

I'm planning on having Successive Petition Panda lecture as we tie up habeas issues next week. ["Failure to identify express retroactivity makes me a saaaaad panda"]

WOW. That is funnier than Chicago's closing last night (in which I almost cried from laughing as a juror). "I don't know what it is like to lose a child because I have none." I immediately thought that he expects a child of his to die before him if he does have a kid.

Congratulations, Mark. This is important Kingdom Work, whether you know it or not. There is no one-size-fits all, be it law, education, medicine ... those who have been in a rush to enforce such dictates often have other motives. This is a victory for justice. Allow yourself to be back-patted today. You earned it!
RFDIII

The best part: "The dissent says that 'Apprendi, Booker, Rita, Gall, and Kimbrough have given the lower courts a good deal to digest over a short period. True enough- and we should therefore promptly remove from the menu the Eighth Circuit's offering, a smuggled-in dish that is indigestible."

This comment was over on Doug Berman's blog: "As a resident of the city that hosts the Asparagus Festival, I can tell you that if your spears are bitter and indigestible, you are cooking them wrong."

Hey now. I called Professor Osler a crackhead, not an idiot. There is a difference.

What a wonderful victory for y'all, Professor. And, for the record, none of us ever doubted that Mr. Benham would do great things...terrible yes, but great. :D

I just realized that my quote sort of compares Dustin to Voldemort, and he is probably the least Voldemortish of all BLS grads...LOL.

Well, not so much of a difference now between a crackhead and a cokehead.

2) Pull in Acosta and Benham to form "Team Goofy" (what, was Hoelscher unavailable?)

Tapp, I don't plan on taking the actual final. Instead, I'll just write for both exams: Tapp called you a crackhead, that is worse than anything I've said in class and, therefore, I deserve at least second to lowest grade. Tapp deserves the lowest.

This week is shaping up to be better and better.

Also, what is Alito doing out from behind Scalia's apron? Someone's 'bout to get a wooden spoon up the backside 'a his head.

And who cares what Roberts has to say? Homeboy can't even manage to memorize 35 measly words. He'd never have made it through PC.

I would love to see Professor Powell assign Chief Justice Roberts a memo.

I see Thomas was the third dissenter? What was Scalia thinking? And I agree with Lane -- Scalito'd best be watchin in back? It was amazing that during the inauguration all my distaste for Bush was used up (though I did smirk when I saw Cheney in the wheelchair), but seeing Scalia made me most angered; seeing Thomas talking up a storm to everyone around me made me wonder why he's not such a chatty-Kathy in the courtroom. Guess when things actually matter he doesn't have as much to say.

Quoting old school Cube automatically made you my favorite professor I have yet to take.

Congrats! Being a part of this process has been a wonderfully rewarding experience. It reminds me of how our justice system is one in which a few people with a just cause can make a difference. To be even a small part of this is both exciting and humbling. Thank you for serving as such a great example to me and all the other budding lawyers who have had the opportunity to work with you. Your determination and resolve to make a change throughout Spears and Kimbrough remind me how I belong to a service profession. If nothing else, you've taught me that change is attainable, and we have the power and ability to make it happen. Thank you.

I am just now seeing this because now my school's internet filters are completely blocking all access to blogs . . . there must be a Supreme Court case in there somewhere . . .

Hey, is it just pure coincidence that this decision came out the day after Obama's inauguration? (says my inner consipiracy theorist . . .)

I am just now seeing this because now my school's internet filters are completely blocking all access to blogs . . . there must be a Supreme Court case in there somewhere . . .

Hey, is it just pure coincidence that this decision came out the day after Obama's inauguration? (says my inner conspiracy theorist . . .)

Swissgirl ~ that exact thought crossed my mind as well (and I am not an attorney).

SG-- I think it's probably a coincidence that the opinion came out after the inauguration, but I suppose there is a chance that they waited until then because they wanted to deny the Bushies a chance to seek a hearing.

I doubt that is the case, though. Probably, it just took that long to sort it out.

AWESOME!!!! Britney is FINALLY getting her kids back! Good Job!

Does this mean you are buying at Siete Mares on Friday? Congrats on a well-earned victory. The wheels of justice may turn slow, but they do turn.

I think the selective omission of the Cube line in that quote was a good move.

Wonderful! Congrats! This is a true testament to your hard work and research!