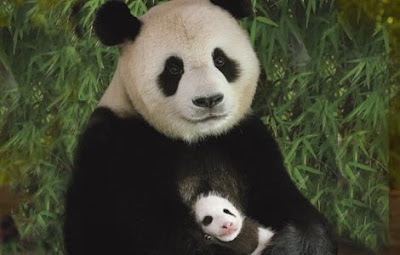 Argbf have simple four-point panda plan:
1) Not live in zoo, but in freedom
2) Use freedom to make world better
C) Institute a gradually progressive marginal-rate tax plan with the primary burden on this increase falling only on those making incomes which would place them in the top 2% of all earners
4) Live in peace with Woodley Park residents, eating only slow and fatter ones and then moving into slow, fat people's apartments
5) More bamboo

Argbf not invade things or make government bad or eat your money. Argbf not big liar like Grar, and Argbf also not hiding gun in cage like Grar. Grar run over children with truck.

Comments:
"Institute a gradually progressive marginal-rate tax plan with the primary burden on this increase falling only on those making incomes which would place them in the top 2% of all earners."

And that doesn't even get into the corporate tax (second highest in the world) and the capital gains tax. Both of which we are likely to see raised under an Argh administration.

Argh wants to punish growth. He wants to punish success. He wants to say to those people that own, run and operate businesses and create jobs that due to their hard work they will be more heavily taxed. Not because it is necessary. Not because it will increase revenues (history has proven that claim to be a lie). No, it is purely based on some notion of fairness. We might stifle growth, creativity and entrepreneurship, but at least it will be more fair!

He wants to fundamentally alter the Panda dream from "work hard to reach success for yourself and your family" to "work hard so you can get into a higher tax bracket and give the Panda government more of your money, and we will decide what to do with it."

1) It's "Argbf" not "Argh."
B) The Panda dream is to escape from the zoo and achieve world domination by controlling your nuclear weapons.

I say leave the Elephants in charge and keep the Pandas in their playyard.

Oh, yeah, those elephants have done a great job! Where is that President Bush, anyways? He seems to have been taken to an undisclosed location.

OMG! What a cute baby! I am totally voting for Argbf.

By way. Me not socialist or marxist. My aunt panda live in slum, Shirotori Animal Land in Japan. My uncle forced out of bamboo forest because not make payments.

Me? Me laughing with my millions!

Hmm. The picture had me, but then I read the platform...hmmm, eating people probably makes you a naughty Panda, Argbf, right up there with flamethrower Panda...
But then again that is a very cute baby...and you say it is yours...

Of course, after further consideration, both candidates appear to be man-eaters, so I am going with Argbf, at least he is willing to let the skinnys have a sporting chance. Though, he should be aware that fluffier folks often have guns to back up a reluctance to sprint in fear...yet I suspect like many politicians he will actually go for the easy prey, the ones he catches out jogging, first...

I am voting for Argbf, because Grar runs over children in his truck.

Don't blame me, I voted for Argbf.

I support Argbh. He good panda. Do you know the trouble he face as cub? His grandmother evicted from zoo in Kyoto for not be entertaining. His cousin Rrghh got supply of bamboo low than usual, leading to him eating fat residents of Seattle. But Argbh make it through by relying on wits and skill. Grar no maverick! He just try to foreclose zoo to make panda leave for wild. Who you want picking up some phone at 3 AM?

Without an opposing thumb, I'm not sure either panda could answer the phone at 3 am. They would just kind of knock it onto the floor.

W if off with Babar and Celeste. Je likes Babar's green coat

Osler, I'm worried about you. Serr said this is the best time of the school year for professors and you are putting up panda political posts. I know you love pandas; however, I think you may be suffering from anxiety or something because this is just odd. It isn't the 8 am thing, it is this type of thing that is making me re-think my choice in classes.

RRLs, the panda dream is just to have plenty of food to eat all day, and a place to run around free in. It's not necessarily every panda's dream to make fifty gazillion dollars. Making $200K would be plenty, which is still below Argh's higher-tax bracket.

Yeah, and I'm gonna have to get faster so I don't get eaten by Argbf.

Argbf will lose to Coco.