Sunday Reflection: They Like Jesus, But Not the Church 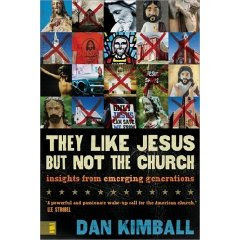 On the way back from Del Rio, one of my many stops was in Austin to poke around in my favorite bookstore, Bookpeople. If you haven't been there, you should stop in-- independent bookstores are too rare these days.

I happened across a great book, much of which I read standing there in the aisle (I then bought it-- that's only fair). It was They Like Jesus but not the Church: Insights from Emerging Generations, by Dan Kimball. The book is based on discussions with those who know something about and are attracted to the teachings of Jesus, but are turned off by church.

If I could identify one thing from the book that resonated with my own discussions with such people, it was the idea that they did not want to go to church because of the (too often accurate) belief that once there they would be told how to think. Often, this directive teaching conflicted with what they knew of Christ.

I have felt the same way (though not at my current church). Christ taught love more than anything, but it is hard to see that in some (though certainly not all) churches amidst the judgment and anger. When Christ did show anger (and he did), it was directed towards the church authorities, businessmen, and the self-righteous. He wasn't angry at those who were sinners, including those who committed sexual sins, crimes, and even those who were members of hated groups. Yet our churches too often view the world in exactly the opposite way-- with anger at sinners, and love for the church authorities.

Comments:
When imperfect people try to emulate the Perfect Man, we tend to come up short. Churches are full of imperfect people who need just as much love and patience as those who commit more culturally taboo sins. Hopefully, true disciples of Christ will give every imperfect person the love an patience they need.

I've often been turned off by messages of strict conformity from the pulpit or the congregation. But, as I suspect is the case with many emerging church types, a dislike for being told "what to believe" is also a convenient excuse to continue living in a way we know we shouldn't or for just sleeping in on Sunday morning. We are called to gather for fellowship and for teaching. And sometimes the things we hear at church directly challenge beliefs we hold because they make life easier, not because we know them to be true. I'd much rather believe that the Bible said that I can live as sinfully as I want to, because I know I'll be forgiven. But long ago a church pastor taught me that faith without works is dead. There are truths out there that yes, we must be told to believe, because as flawed creatures we would prefer not believe them for ourselves. But a person operating under a general policy of non-conformity probably wouldn't like Jesus telling them "what to believe" either.

Jesse said: "But, as I suspect is the case with many emerging church types, a dislike for being told "what to believe" is also a convenient excuse to continue living in a way we know we shouldn't or for just sleeping in on Sunday morning."

I think this is a hasty generalization. And I think it's indicative of all non-emergents' tendancy to dismiss challenges to their way of thinking as "bad christians". You see what I did there? I hastily generalized.

I think too many churches get caught up in the "love the sinner, hate the sin" mentality of addressing issues, and they seem to spend a lot less time loving the sinner than hating the sin (see: abortion, homosexuality, etc.).

You know what is funny, I've been going to church since I was born. Kessler Park Methodist in Dallas for 15 years and then First Methodist in Sherman. And I can honestly say that I have never heard a single sermon, bible lesson, sunday school lesson, etc. discussing homosexuality or abortion, or any of the other supposed issues on which Christianity supposedly supports hate/anger/etc. I'm not saying there aren't churches were this happens, I'm just saying it has never happened to me.

So, if you don't like the church you attend then find another one. Come to the Methodist church!! We are way to busy planning potluck dinners and building recreation centers to worry about contemporary social issues!!!

The issue I have the most trouble with is a hard one for me to admit, and a really fundamental one, but it's the notion that there is only ONE way to heaven and that everybody else--Hindu, Muslim, Buddhist, whoever--is going to hell. I know I am probably oversimplifying, and I apologize if I am. I know that many Christian churches have a more expansive view . . .

But I know some Christian missionaries in India who believe exactly that--that The Devil is in the Hindu temples, for example (that's an exact quote)--and having lived in India myself and known some of the most wonderful people on earth who are Hindu or Muslim or some other religion, I am uncomfortable supporting a church that sends out missionaries who operate under those beliefs. And whose primary goal in sending out missionaries is to convert people and even endanger the local people who work with them, not to build hospitals or schools and preach the Gospel on the side.

I haven't fully resolved how I feel about this; I do struggle with it . . .

I grew up attending Grace United Methodist in East Dallas and I never came across one of those sermons, either. In fact, we had many gay members of the congregation.

"So, if you don't like the church you attend then find another one. Come to the Methodist church!! We are way to busy planning potluck dinners and building recreation centers to worry about contemporary social issues!!!"

That is a fact! The more the merrier.

I would just like to say that it is a proud day when someone reps Kessler Park and Da Cliff on this board. It brings a tear to my eye. See, this is an example of the kind of openess and togetherness you find in the Methodist Church. Gay members? Heck, we had a lesbian pastor while I was at Kessler Park, and it literally was never an issue. We just kept right on beating Grace Methodist in rec league basketball games without batting an eye....

Ed, much love to you man. Hopefully we can share some casserole at a potluck dinner very soon.

I think Jesse has a good point. I'm not going to lie: I grew up in the Presbyterian Church (I even taught Sunday School for many years), and during highschool/college I attended services with friends from a variety of denominations: Catholic, Assembly of God, Methodist,Baptist, Reformed, non-denominational Bible Church, even Jewish and Pagan ceremonies. And never once did I feel like I was "told what to believe". The reasons I don't go to church right now is because I've been too lazy to church shop in Waco yet, and the reason I occasionally didn't want to go growing up was because it was boring. I wonder what services these emergents have been attending where church members are being brainwashed, or if it really just a way to justify not wanted to go to something that just doesn't interest you.

I have to agree with JT. My impression of many churches (I visited quite a few after leaving the one I was brought up in to see if I cared for any of them and decided I didn't) is that they tend to not separate the sin from the sinner anymore.
The amusing thing to me is that Jesus said you shouldn't judge your fellow man but churches love to point out the problems of others. Judging a person for things you think are sinful is like allowing a co-defendant to sit on the jury.

In all fairness, isn't criticizing churches that bash homosexuals, abortion, etc... doing the same thing that they are?

If we're so concerned about people in those churches judging other people, why are we judging them?

Or is judgment not a bad thing when we don't agree with the judgment of others?

Personally, I believe we have to make judgment calls as to behavior. But we should never write someone off as a lost cause destined for hell.

There are clear biblical prohibitions on certain types of behavior. And churches have the right to prohibit that behavior or not.

And when we start bashing those churches for being judgmental, there is no difference between us and churches that teach that "God hates fags."

With any institution or institution-like group, a common creed or set of beliefs is a definitional point. Of course joining a group, to some extent, is going to tell you "how to think." For the most part, you are like-minded with your compatriots because you already do "think" alike. I think the problem is when one group attempts to broaden itself out doctrinally beyond the agreed-upon basis, like when a church involves itself not with the divine but the mundane. It's not being told what to think that is the problem, but being told to think something beyond the scope of the original basis for forming an institution.

I think many people (myself included) have an aversion to institutionalizations and standardizations. Certainly I find myself intellectually among the rabble-rousers -- CLS, the political left, etc. The idea of doctrine bothers me, because it attempts to set as immutable that which is always mutable: belief and the epistemic space in which we act as epistemic agents.

Not gonna lie, I don't like the Sunday morning time slot. And I can't find a church that seems to fit with a later service.

And then there's the issue of when I find one I don't mind getting up on Sundays for and subsequently get into some kind of feud or have some kind of annoying people-drama with other folks in the church. Then sleeping in totally beats the heck out of seeing people I'm not fond of (for one reason or another) first thing Sunday morning.

If they ever invent a church sans "drama" that meets in the evening, sign me up.