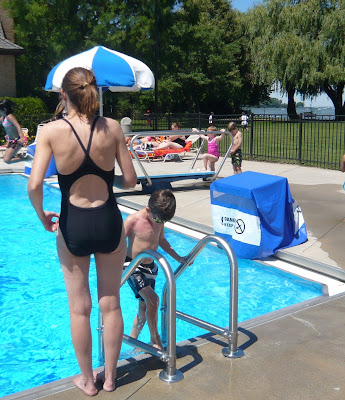 Here's the deal: My carbon footprint is like a Sasquatch walking through snow. It's huge. I drive a lot, I fly a lot, I am alone right now in this 2,600 square foot house with three separate air conditioner units on, I like boats and pools, and I'm not even very good at recycling. I know this is a personal failing, in that I use up way more energy than I should, but is it a moral and spiritual failing?

A talk Mary Darden gave at church this morning has me thinking that it is. I understand in a general way that we are custodians of the Earth, and I get that. This morning, though, a perhaps deeper meaning became apparent to me through a comment Bob Darden (Mary's husband) made. He reminded me of something that I already knew-- that it is poor people who very often pay the price for our environmental excesses. They live where we put pollution, they suffer from bad water, and they are most affected when prices go up. Just because I can afford to consume a lot of power doesn't mean I should, and the fact that I do probably in some way degrades the lives of the least of those among us.

Comments:
Yes yes yes. This is true regionally, but also globally, especially with regard to climate change. You could also consider it generationally, as well as in terms of class. I also fly too much, but there are few other options. Turning off the a/c and turning on a fan instead; biking or walking or taking public transport instead of driving; unplugging large appliances when not in use...all are good, morally and spiritually.

I don't know about turning off the ac ESPECIALLY in TEXAS. You cannot really fly less, MAYBE you could drive less but you don't want to be KILLED like being on a silly bicycle on the freeway... Texas is HUGE. You could get a hybrid car maybe. You could change all the lightbulbs in your house into those LEDs, stop using grocery bags and bring your own to the store. They have some nice bags out there now that are not dorky and made of HEMP and you just keep em in your cars. Not only that My store, Fred Meyer give you a 5 cents credit on your grocery bill for each bag you bring in yourself. After a while it feel weird to get plastic bags you get so used to bringing your own bags.

You can turn up the ac a little and wear less clothes in the house esp when you are alone in the house... maybe not when a lot of people are home. You could plant more trees,. recycle stuff. If you paint you can use low fume paint.

Here is one thing I did today... we bought a dining room table at an antique store today. It is solid oak, quartersawn and it has three extension leafs (leaves?) its gorgeous and it is like a hundred years old. I really liked this one at Costco for 1500 dollars yet this one was FOUR hundred and NO NEW TREES were killed.

As Bob the Builder says: Reuse, renew, recycle.. Try to find new uses for old things. Also you know what else is bad? dry cleaning.. THE BAGS SUCK AND THE FUMES ARE REALLY BAD. Everyone has to wear grown up dry clean only clothes sometimes but if you do not have to, why do it?

They also make these plug things they are strips that sort of turn stuff off for you when you are not using them... I do not know what they are called.. THEY ALSO have these cool things that turn the lights off in a room when no one has been in it for however long you set it for.. it has a motion sensor on it to tell when no one has been the room for a bit and if the lights are on still it turns them off. We are putting one in every room of our new house. I don't know what those things are called either...

But anyway there is this place you can look for stuff like this ECOHAUS I think their site is ecohaus.com and they have all these products and much more.
There are a lot of things you CAN do that do make a big difference. ALSO another thing is and this is HUGE you can join GREENDIMES which totally helps you monitor your junkmail and stop it all. and they also plant a tone of trees They have a website too.


Hey you know what? I just thought of something else... about the prayer thing?

Our dog Amy got hit by a car going like 70 last fall, and I had bought her a St Francis medal for her collar and she was wearing it when she got hit. Everyone said she should have been killed but she was not and she is fine now. Her broken hip has healed... so that is like a mini miracle I think too.

Yes . . . I became acutely aware of the way poor people pay the price when I lived in India. I think about it all the time I'm in air conditioning--yet I can't seem to not use it, when it's available. It's something I really wrestle with.