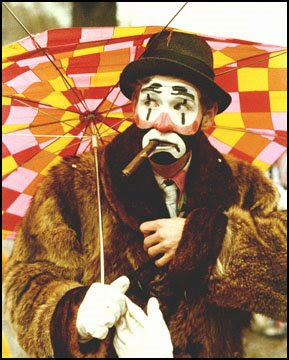 Washington & Lee Law School in Virginia, which consistently ranks in the top 25, has announced this bold revamping of their 3rd year program. Here are some of the specifics:

Does that sound like, oh,... Practice Court? Which has been around for 80-some years? You bet it does. Even a broader discussion of the change reflects the same perceived strengths and concerns people have about PC after some 8 decades. There is the possibility, it seems, that the broader legal academy may be considering a move back towards the practical education Baylor always provided, using the methods we have long promoted such as the extensive use of simulations. (In fact, I find it odd that no one from W & L came to talk to us as they developed this).

Notably, the W & L program does diverge from Baylor's Practice Court in significant ways. Specifically, it will allow for simulations other than civil litigation, and it will include a clinical component.

Comments:
Why is the clown sad?

And why is he wearing a mink coat?

won't that just mean the one thing baylor law prides itself on as being unique is going to become common at other law schools? won't that end up hurting baylor law's ranking?

"Nothin' scarier than a clown."

I think Shakespeare wrote that.

There are criminal trials for mini-trial, but not for Big Trial. We don't want to cheat anyone out of the joys of the discovery process!

Suggestion for BLS --
Leave PC I, PC II, and PR like they are.

Make PC III a "choose your own adventure" -- students select whether they want to do (1) the tradtional PC III (advanced civil litigation practice)(Wren/Powell) OR (2) a revamped Crim Practice and Procedure (truly for post PC kids - a course in fed and state criminal practice)(Osler) OR (3) a 5 hour transactional practice skills class (with 1/3 T&E/property, 1/3 corporate, and 1/3 tax or contracts)(new professor). Both the Civil Litigation and the Crim Practice PC IIIs would have a big trial. The transactional class would have 3 projects.

What do you think??

Lurch: I think that is a brilliant idea. I would definitely support it. We could debate about what should be covered in a new transaction concentration, but I think the concept is outstanding.

Not everyone who goes through Baylor wants to focus on general civil litigation (and not every Baylor student is cut out for it). Make the other concentrations just as tough as the current PC III (make it so nobody will choose the criminal or transactional class because it is easier).

Really, this would make the current PC III even more "elite." Right now, a good percentage of PC III students have no intention of doing civil litigation and don't really take it seriously (at least, they don't take it as seriously as some others do). At the same time, most students in Business Organization I don't see that as their life's work either, so that class is really brought down to a very basic level. Your plan would allow an intensive quarter during the third year focusing on the area the student believes he or she actually wants to practice.

A serious query for you all at Baylor, which I noted was raised at W&L on a similar blog...what about the individuals (admittedly, not the majority of any entering class, I imagine) who really have no desire whatsoever to become barred in any jurisdiction, and are entering law school for other career purposes (i.e., financial services, banking, etc.)? Are any accommodations made at Baylor for students in these circumstances? Or do they have enroll in these clinicals as any other student who wishes to practice?
I wonder, given the current and anticipated future employment climate, with a glut of lawyers in most areas of the country grasping at the same jobs in practice (and with career services increasingly encouraging students to explore alternative career paths), if forcing students into clinical courses that may not always be in their best interests careerwise is such a good idea. Whatever happened to the notion that clinical programs are great, optional programs for those who desire them and need them?

That sounds harsh, but our promotional materials are clear that we are a practice-oriented law school; we train students to practice law. We've been this way since Judge Alexander designed Practice Court in the 1920s.

I wouldn't be surprised if our admissions office told people not wanting to practice, "we'd love to have you at Baylor, but you really might be happier somewhere else."

First, I completely agree with 8:02: if you don't want to practice, don't come to Baylor. Everything that can be said about our focus on civil litigation and how that pans out for students who don't want to litigate is that much more true for those who don't even care to be licensed and practice. BLS is a very small school with a very specific focus and a mission of preparing people for this profession that we are very deeply comitted to and up-front about. If a prospective student doesn't want to actually practice law, then Baylor is not the place for him or her, and Baylor herself will tell you that straight out; it's not exactly a secret.

On a more personal note, if someone is looking into law school and right off the bat has no intention of practicing law but only wants to augment their credentials and/or competitive edge in another profession or job market, I would STRONGLY urge them to think VERY carefully about whether to pursue a JD. This is not a cheap degree to get--financially, how long it takes to get it, and its emotional and physical wear and tear on the student. A law student is fairly guaranteed at least one year of grueling academic thumbscrews while his or her thought processes are stripped down, scrapped, and rebuilt in an environment of high competition and an ever-lingering spector of insufficiency always hissing in his or her ear. The process (and, later, the profession) is plagued by disproportionately high incidence of substance abuse, anxiety, and depression. Most of us graduate with enormous debt, and I can't tell you how many of my classmates whose parents were also lawyers could themselves remember clearly when their parents were finally done paying for law school, as that memory occcurred somewhere in their SECOND decade of life. This is especially true at Baylor given the expense of a private education and the schools' very unique take on how law students should be turned into lawyers. Law school, at least in theory, is focused on a very specific skill set, and if someone wants a general boost in competing in the job market, maybe something a bit more general like an MBA might be the way to go--particularly if another program traditionally offers more financial aid that is truly aid and not based as much on loans and debt as law school is.

If this approach to law school is bad for the student, it isn't exactly great for law profession either. In fact, it's expensive on the other side of graduation as well. Many law professors and students are frustrated with the mandatory third year of the curriculum in which they feel little is accomplished beyond killing time. Increasingly more employers are frustrated with the cost of training new graduates who have been taught all about what kind of materials were used to make the hammer and the equations of physics governing its theoretical use yet haven't the first clue as to how to pick the thing up and start banging away and building things. Are generalists and tourists in the schools causing this problem and expense? Likely not--at least not in a significant way,--but the overall shift from the very costly theoretical approach to a practical model that is more economically favorable to graduates, employers, and--MOST IMPORTANTLY--clients and the system as a whole (because eventually that cost is getting passed on to them to some extent or another) is, at best, not helped and, at worst, perpetuated by this sort of academic and professional tourism. What is likely best in the long run for the profession, its members, and its clients is a move away from the perception that the most critical part of what we do in law schools is primarily philosophical and abstract navel-gazing and remember that there is a very practical and highly specialized field out there that most of the students are going into and in which they must be able to practice just as much so as, say, an electrician must be able to install and repair wires, circuits, and fuses.

For every impersonal corporate client and Wal-Mart-style behemoth you might think of and want to get popped with a high legal fee, remember also that there is a farmer whose arm has been torn off in a combine, a woman who has been taken advantage of, or a child who will never wake up again who needs to be able to afford a kick-ass lawyer too.