New Baptist Covenant Celebration wraps up with a bang, tribute to Jim Underwood 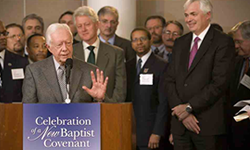 It would be kind of an understatement to say that the last day of the Celebration of a New Baptist Covenant was spectacular. Let's just say that my Dad sat (and stood) through 6 hours of church music and sermons today, and loved it, and he usually is not so much like that.

This morning, Baylor Prof. Joel Gregory (Truett Seminary) delivered an amazing sermon that pulled in his audience. Later, Republican Senator Charles Grassley of Iowa spoke, and he exceeded all my expectations with a talk that was both substantive and passionate. The other speaker, Lindsey Graham, pulled out at the last minute, reputedly under pressure from the Southern Baptist Convention. Wimp.

After lunch with my parents and 8 or 9 Underwoods, I went to hear 7th and James churchie Mary Darden talk about disaster relief. She did a fabulous job, and showed real emotion as she described what our church did after Katrina. It was one of my favorite presentations of the whole conference, and that's saying something. After that, I went with Pat Wilson to hear James Dunn and others talk about separation of church and state. Dunn, a Wake Forest professor, is the one who directed me to take the job at Baylor (this was in a South Carolina Cracker Barrel Restaurant) and I thanked him for that good advice.

The evening session, though, was the real stunner. Dr. Charles Adams gave about the best sermon I have ever heard. The only flaw, maybe, was his thanking "Jim" Underwood for organizing the CNBC-- well, it wasn't a flaw if you were the real Jim Underwood (Bill's brother), who was sitting in the front row. You can see the video here-- just scroll down the Charles Adams sermon near the bottom. You might want to fast-forward to the end, to get a flavor of what happened, and then you will want to watch the whole thing.

The last scheduled speaker was Bill Clinton, who hasn't been doing such a great job of public speaking the past week or so. Fortunately, he got his mojo back and gave a well-reasoned argument for reconciliation with the Southern Baptists. Right before he spoke, the Morehouse Glee Club performed, and they were incredible-- it would have been worth the trip just to hear them.

The spirit of the whole occasion was unbelievable. It was three days that changed many lives, and was one of those times, one of those very rare times, that something happens where years or decades later people say "I was there."

Please tell me that this is all documented on audio and video.

Just looked at the photos on the website. It looks tremendous, momentous . . . wow.

Osler's presentation on engaging the criminal justice system at the New Baptist Covenant Celebration was awesome! If it has not yet been posted on this site, I am officially making that request. You are MY hero, Mark. And you have an awesome family too!