The Loss of a Mentor: Stanton Wheeler 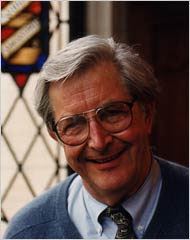 I don't just love the law; I love a particular thing about law. And that thing is the fascinating place where legal restrictions meet real people-- that is, where a law limits freedom, and people decide whether to follow it or not. My seeming obsession with crack sentencing comes from this-- the harsh laws weren't making much difference where the rubber hits the road. When I talk about ethics, the rules don't mean much in the abstract. Ethics only mean something when they actually affect a specific decision, when someone has to forego an opportunity or love or excitement or money because to pursue something would be wrong.

This love for what is real in law isn't accidental; rather, it was taught. The person who taught me to focus on what law really does was Stanton Wheeler, who died Friday at age 77. The irony (or not) is that Prof. Wheeler was not a lawyer; he was a sociologist who came to Yale Law from a professorship in the sociology department at Harvard. At the time he came to Yale Law it was a groundbreaking move to hire a non-lawyer to teach at a law school. If ever there was a right person to make that move, though, it was Stan Wheeler.

From 1989-1990, I was Professor Wheeler's research assistant. I put together material for a class on music law and worked with him on other projects. The whole time, I was just watching his mind work. More specifically, I was watching his eye. The same way an artist has an eye for shape or color, Prof. Wheeler had an eye for that meaningful intersection between law and person. For example, one project we worked on involved New York City's cabaret laws. Those laws dictated that no more than three musicians could play at one time in many establishments. We followed that law to where it mattered, to the place where musicians had to either work with or around that (somewhat bizarre) restriction. On the one hand, it meant that the trio predominated in New York clubs, and that sidemen had to be chosen carefully; on the other, it explained the existence of illegal clubs in New York well after the end of prohibition.

He may not have been a lawyer, but I have yet to meet someone else who so clearly saw what was real about the law. I hope that his lessons live on in myself and others as the best legacy any teacher can leave.