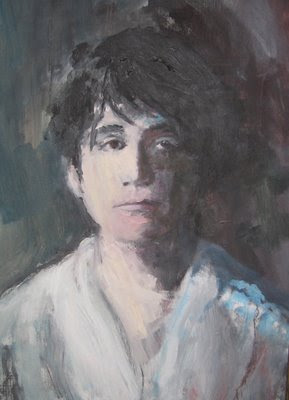 I was walking today when a song slipped out of my iPod. I don't remember putting it in there, or hearing it before. It was "High and Low" by Greg Laswell. It isn't the kind of song I would normally like, but it captured my mood in that exact moment-- kind of a very gentle melancholy born of sad but not tragic memories.

Found a letter from a man
I might have met
Addressed to you
I'll steal the words he ended with:
"I miss you."

My life has been largely free of tragedy and full of good fortune. There was no dead father or alcoholic mother or jailed sibling; no debilitation emotions or crushing illness. My sadnesses don't take me back to a horrible memory but rather to my own failings, those moments when I should have been kind and wasn't or felt lost when others were really there for me. My dad was painting a portrait once, and someone said the subject looked sad (it might have been the one shown here). My dad disagreed; "It's just the good blues" he explained. I like that phrase, and I know that feeling.

The funny thing is that the good blues today came on the heels of what has been a wonderful week. They just kind of wafted in on a memory of a slight I may have once inflicted, many many years ago. Of course, with the kinds of things that happened this week there are always the seeds of both challenge and change, the vague sense that all this may be temporary in one way or another.

And, it is October.

October, when there should be leaves on the ground and the sound of a marching band practicing and events at the school to be a little late for, when certain scents return-- apples and cinnamon and pumpkin and smoke. Each leaf on the ground is a death, but also an accomplishment and promise fulfilled, greater than any of mine. When I have the good blues, each leaf is humbling.

If you were in my courtroom today, I'm sorry that my critiques were not as sharp and knowing as I hope for. Part of me was somewhere else apart from here in place and time, a little boy in a lion costume walking by the curb, pushing the leaves with his feet, sad that Halloween was over.

Comments:
That's either totally brilliant, or you are stoned. Or both.

Is there a Dorian Gray feel to your words and this painting, or is it just me?

"It had brought melancholy across his passions. Its mere memory had marred many moments of joy. It had been like conscience to him. Yes, it had been conscience. He would destroy it." -Oscar Wilde, TPODG

I love that painting. And I don't think you are stoned.

I saw Osler today. He was wearing blue, anyways. He did have kind of that look, too, but he was running to his car at the same time.

Which reminds me of the great time that Vic D. was teaching juvenile justice, and looked out into the courtyard and asked "Why is Osler running around with a rifle?"

Fall is my favorite season. Crisp mornings, fallen leaves, flag football on the frosty grass of a battered practice field. Short days, long nights, dark shadows. There are "good blues" that we wear like protection against the really unfeeling outside world. It's not nostalgia, and it's not sadness. Stoned? Not hardly, and anything but, I'm sure.

"Ripple" by the Grateful Dead always makes me feel like that. It's a fall song.

PC sure would be different if the profs were stoned...

You may have been feeling off, but your critiques were still very helpful. And they made me realize how far I have to go before I'm any good.

Its not haiku day
But its "Sports Day" in Japan.
Haiku's from there, right?

ipods do that. They send you secret messages. Mine tells me not to wear clothes to law school, sometimes.

I think that is my ipod! I lost it.

I have ALWAYS loved fall, and then I moved to CA. I was SO HAPPY for the first year that there was no snow, that I was in a state of delirium for along time. BUT- then, when it was supposed to be fall for the SECOND time and no leaves turned or anything.. That was SOOOOO weird to me. Then a few years later we made our first trip to Oregon. There it was!!! AUTUMN in all its splendor. Rainy, of course - we are talking about OREGON here - but it had been there all along hiding up north.

I was SO GLAD to see it and did not know until then how much you can miss the seasons change. Now that I live here? I will never leave. I love it here, and my new hobby is trying to convince everyone else to move here.

I'm disturbed that the voices in my head can now post on their own. Don't worry, I won't listen to it and remained fully clothed at school.

Besides, I would never lose my iPod.