It was good day. 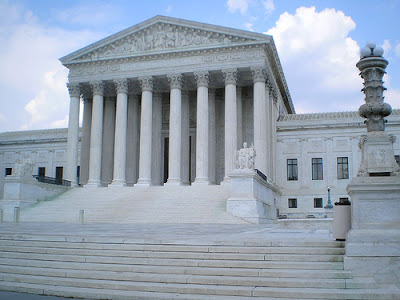 Got me on the court and I'm trouble,
[Messed] around and got me a triple-double...
Today, it was a good day.

Well, no. I'm not capable of a single-single, in basketball anyways. But today was a good day, if you are me and not Ice Cube. We probably have different views of success.

Today was the argument in Kimbrough v. United States, challenging the holding of the Circuit Courts that a district judge is not free to depart from the 100:1 ratio between crack and powder cocaine because she does not agree with that ratio. For seven years now, I have have been working to get judges that discretion-- writing articles, litigating it, and trying to influence Congress. Today was the culmination of that work, by me and many others.

My favorite part of the argument this morning was when Michael Dreeben (arguing for the government) pointed out that nine circuits agreed with him and a Justice of the United States Supreme Court said, basically, “La-di-da.” The Justice accompanied this dismissal with a dramatic wave of his hand that signified the change that may be coming.

More importantly, Chief Judge Roberts seems to think that if Congress mandates a 100:1 crack/powder disparity in the sentencing guidelines, they need to do it through, like, a law, rather than via inference. Having made this precise argument to several Courts of Appeal to only blank stares and rejection, it was wonderful to hear the Chief Justice raise this point so forcefully, especially since he may be the fifth vote in our majority. What he said in response to Dreeben's inference argument, verbatim, was this: "No, Mr. Dreeben, your office used to argue that when Congress wants to do something, there's a way to do it. They pass a law through both houses, then the President signs it. That's the only way they can give legal effect to their intent." He later rooted this concern in the fact that since Booker, Congress has chosen to take no action. This is an argument that was first put forward by Benham and I in our Spears petition (the reply brief, actually), and later incorporated into the Petitioner's briefs in Kimbrough.

Afterwards, I walked out of the Court and down the high marble steps with Acosta and Benham, feeling euphoric. There was an amazing and beautiful tableau before us—the news teams waiting at the bottom of the steps, the Capitol Building in the near distance, and beyond that the Washington memorial and the crystal-clear blue sky of early fall in Washington. I stopped them, as we were alone on those steps, and took it all in.

There may be only one such moment in a lifetime, and I wanted to breath it in deeply.

I hope that wow refers to Osler's Razor quoting Ice Cube. Then I second Wow!

What is a triple-double?

no, seriously, it was a WOW. And Scalia was having a good day too. There were a couple of times when I just wanted to say "oh Smack!"

Congratulations. It is a beautiful thing that you shared it with your students as well. I got chills walking to the Supreme Court when court wasn't in session. I can't imagine what you must feel. I hope the Supremes rule in your favor.

Impressive Mark, See what is great about your job is that you so obviously make a difference in the world. Seven years on this particular difference, but still the legal world is different now and that somehow seems different than what happens day in and day out in the classroom.

You're my hero today!

And I was most impressed on awakening to NPR's talking about the important 100:1 crack:powder guidelines case after recently reading about it in the Razor.

In my book, you're super-duper awesome once your Supreme Court case is mentioned the day of, on NPR.

And a celebrity, keeping it real by reaching out to the little-people with continued daily blog posts--priceless.

Keep up the good works!

Sounds like a great day in SCOTUSland! Sorry I could not meet you and your entourage for coffee, dinner, etc. this time.

Thanks for sharing a good day with all of your readers. And, keep that thought about "grinding engine built of inattention and fear". It applies to a lot of laws.

Congrats on seeing your work approach its culmination...

I remember that feeling of walking down the USSC's majestic marble steps after hearing arguments on a case you have so much invested in... it sticks with you forever

Terrific--absolutely wonderful! Now I will have to search for the NPR story. I listen to it over here, several hours delayed.

It's encouraging to hear Roberts' comments. Now I want to know which one did the "la-di-da" gesture. Ginsburg?

Oops, sorry; you said the "la-di-dah" was with HIS hand. Breyer? Scalia?

Now I can't stop thinking about this. It puzzles me why the Supreme Court would be so on-board when all those circuits were seemingly so dense on this issue. Is it because the courts of appeal feel more accountable on issues of sentencing for crack/cocaine? and the Supreme Court is more removed?

Prof. Osler will talk about the death penalty on Ch. 10 news tonight. I saw the news team moving into his office and heard a bit of it.