I'm Having a Great Time in DC With IPLawGuy! 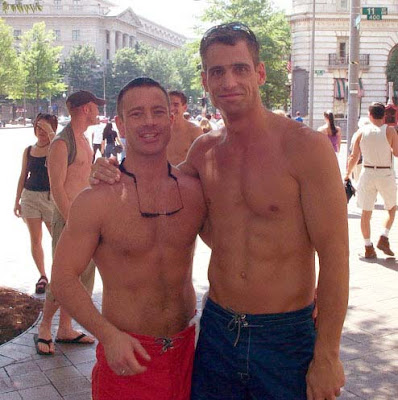 I made it here to Washington, our nation's capitol, and so far things are going great! IPlawGuy, IPLawWife, and IPLawBaby went to see the Washington Nationals beat the Astros tonight down at RFK stadium. Poseur told me it was a kind of low-key goofy place, and he was right. The stadium is an old-school concrete bowl which is equally poor in lay-out for soccer, football, or baseball, and it looks like chunks will fall off at any moment. What makes any stadium, though, is the character of the place, and RFK actually has some of that. Plus, in the fourth inning they had the "Race of Presidents" (video below) in which George Washington, Teddy Roosevelt, Abe Lincoln and Thomas Jefferson run down the basepaths. Roosevelt always loses, though he came in second tonight and might have done even better if he hadn't gotten in a little shoving match with Lincoln right before turning for home.

Celebrity Luvr & Mrs. CL will be visiting with IPLawFamily this coming Sunday, and apparently will get to see an equally exciting game against Colorado.

Comments:
I really enjoy games at RFK. It's old school... all there is is the game. Which is rather refreshing.

It appears that the pilates has really been helping.

Judging from the picture, your new haircut doesn't look that bad, Osler

Anon, don't be fooled, he's the hort one.


He finally became a real boy