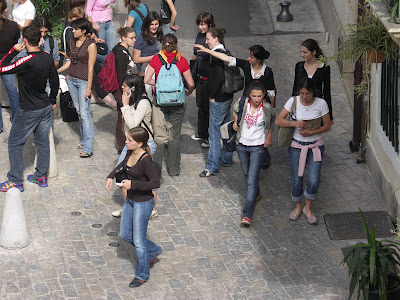 Tyd, quick, pick a winner of the haiku contest! I'm not sure how much longer I can hold off the French... here is a picture of the group that has been threatening me. They are pretty determined and vicious.

Mmmm, pastry. Is that apricot in there? Yum.

Comments:
"I don't like jellyfish. They're not a fish; they're just a blob.
They don't have eyes, fins, or scales
like a cod.
They float about blind,
stinging people in the seas.
And no one eats jellyfish
with chips and mushy peas.
Get rid of 'em."

That's how I feel about the French taking over this blog.

Enough with the French. Let's have a discussion about what we're going to do while the Prof is on vacation outside of the coverage of the Web.

Should we all attack another Blog? We could all ignore the headings and discuss what we wanted. The easy choice would be to designate some other BLS blog, but perhaps we could hit some other posts. I regularly read the TTABBLog (it focuses on the Trademark Trial and Appeal Board), the Washington Post's political Blog, "The Fix," "Nationals Journal" also in the Post and several other Nationals related blogs. It might be amusing if we all started posting haikus on one of these sites. Or maybe not.

Haiku Winners are as follows:

1. Iplawbaby. I could not help it.. I love popsicles.

2.
The Spanish Medievalist/ Swissgirl Tied for second. I liked your images of relaxing summer they took me somewhere else.

3. THe guy who had a really bad client and made out with the cops or whatever is it JOE? I cannot write this AND go back and ck Osler help me out here.


Thank You SOOO much for the honor of allowing me to judge this week's Haiku winner. Osler are you in Europe right now? Try and hold your own against the French til I can get reinforcements.. Swiss Girl and the Medievalist are on their way....

WHERE IS Osler, anyway?

I am soooooo tired. Dog and toddler killing me. Start the coup without me.

Daggumit man, yur in Texas. Should be the Mexican takin' over your blog.

Does your secret mission to France involve doping investigations at the Tour de France, or is it really a "vacation"?

Thanks Tyd. I find that Haiku gives me a healthy outlet for expressing my overwhelming angst.

No no no-- I'm not in France. The french... they're HERE! And their money is very strong relative to the dollar, making it much easier for them to buy things.

Thank you, Tyd! I'm honored to rate this week. And I can come to the rescue, too, except I'll need a French dictionary in hand if this occupation keeps up . . . (at least it's not German.)

I just realized why the Prof is obsessed with the French... he IS one!

He's from a town that has a French name, Grosse Pointe. A real American would be from a town called "Big Point." This place is outside ANOTHER FRENCH named place, De-Troit, or translated into American, "Of Troit."

And the name "Osler" undoubtedly is really pronounced "Oslay" in private.

He's in a field FULL of French words, like "torts," "felon" (most likely pronounced fe-lon') and "defease."

Look out BLS students! Next thing you know he'll be trying to teach you "Law French."

I always wondered why he tried to order "frites" at the Health Camp...

You're right! Another example.

Those stinky French are taking over BLS AND the Razor!!!! Obviously Osler is a hostage going thru Stockholm syndrome. he now sympathizes with them, eaing their pastries and drinking their wine and driving their teeny weeny little cars.... They probably have him all dressed up in Chanel and Balenciaga, smoking those hideous unfiltered Gauoulois (or however you spell the) cigarettes carrying one of those "European satchels" (ManPurse). He is probably on the Metro right now critiquing the fashion choices of unassuming tourists: "Madmoiselle, that chapeau is all wrong for you, and those shoes are intended to be worn with a midcalf cocktail dress in the evening, never during the day. Remove them immediately before I vomit all over this train."

Poor Osler. He may never ever be the same.

who we really need here is Dorothy Newhouse. This crazy old legendary French teacher from Grosse Pointe North. She would have kept these clowns in line.

I wonder where she is now and what she is doing?

She is probably at that big Cafe in the sky.....

We need to rescue Osler. I'm sure the French have taken him hostage b/c I did not see him at BLS graduation on Saturday.

Suspect # 1 - Bates. He may have had something to do w/ Osler's disappearance. On Saturday, Bates was wearing a suit and tie and was sitting slightly apart from the faculty. Highly suspicious.

Here's a newsworthy blog about Baylor Alumni who are federal judges:

Thanks, Tyd! Yeah, my guy made out w/ a cop in a men's room in a public park. The best part was when he told the undercover officer "We have to hurry, those damn park rangers will be coming around soon."

Ya know, if we really want to get rid of the French, perhaps we should sequester them in a room with Donut, Spencer, Iplawbaby, Miles and the young CL's. I'd give the French thirty minutes...tops.

If someone is going to take over the Razor, I would prefer our south of the border neighbors. At least we could get a margarita. Not that I'm knocking wine....Plus, I love a good pinata. Siesta, cervesa, queso, yeah, that's about all the Spanish I know. All food-related. Or bano. I can order dinner and ask for the bathroom. woohoo!

Osler, I think the natives are getting restless. I don't think you want us to highjack another blog, do you? If I'm going to have to highjack something, it sure as hell is not going to be a blog. In for a penny, in for a pound.

By the way, when in Dallas, stay at the "Haiku Hotel" - Hotel Indigo on Main downtown.