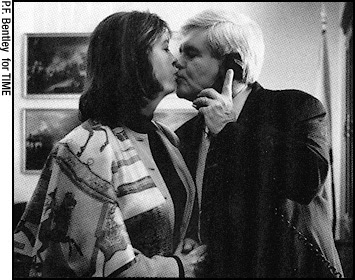 It's going to be a big July in the IPLawHouse! From July 16-18, I'm going to be in DC for a planning meeting for the Celebration of a New Baptist Covenant coming up in January. [the other Wacoan on my committee is Baylor Prez John Lilley, so I better wear a tie. And get this hair fixed. Also, it looks like we have some pretty good material to work with.] Then, the next week, Celebrity Luvr & Mrs. CL are going to pop in to see the IP's for a few days. No doubt after that, Tydwbleach and Tyd2Bleach, Spencer, Donut, and their bald cat will stop by.

If I know anything about IPLawGuy & IPLW, the only one they would have a problem with is the bald cat.

Comments:
Holy crap! Go you, all important and stuff. :o)

1. we have never seen the hair

2. are the cls bringing their kids?

4. tyd & co will only come if IPLAW wears his kilt.

5. Donut banned for life by FAA and CIA from most air carriers due to
incident last winter involving something called the "Elmo Bomb."

Oh, yeah, I heard about that-- it blows up when you tickle it?

The CL heathens are farmed out for July, so we will not be appearing en mass, it seems to frighten the natives.

We would, however, love to see the IPLawKilt.

In the CL household, an "Elmo Bomb" is also called a "Code Brown". We rock paper scissors on who gets to change it.

Donut is kicking the Cl's tail on ESPN poker. Does he have an agent? That kid's a whale!

Is that IPLG & IPLW? They're nice looking. And all Republican and stuff.

WILL WE EVER SEE THE NEW OSLER HAIR?

That's former Speaker of the House Newt "Newt" Gingrich and his second wife. He's now married to a different one.

I am in fact a Republican, but a pretty disgusted one. I worked hard for my former employer, John McCain during the 2000 campaign and refused to vote for W in either 2000 or 2004.

Due to the fact that McCain is a reasonable man who looks for solutions rather than spouting slogans, it looks like he may be doomed again next year. I'm worried that the GOP may force the eventual nominee to run as a xenophobic nut who attempts to scare people into thinking that the terrorists are going to burn down Detroit (oops, already done that).

--By the way, check out today's Bloom County/Opus comic strip. Hilarious. The comparison of Thompson to Reagan are ridiculous. But that's another topic.

And the Democratic nominee will be forced to run as a surrender monkey.

On a brighter note, the Prof and Iplawife, Iplawbaby and I will be going to see the Nationals at Historic RFK stadium next week.

The kilt is available for viewing at parties and other affairs at a reasonable fee.

I just noticed this-- are Newt and his wife shaking hands as they kiss?

I, too, am a disgusted former Republican. I mean I cannot fully call myself a Dem yet, but even I did not vote for W in 2004. I voted for Kerry and I thought that it was such an historic impasse that the Earth might just stop revolving.

I have always loved McCain. The only real Pres race I ever really worked on very intensely was GHWB (41) where he got beat by Clinton. After that I was disgusted because the National campaign just sort of gave up halfway into it.. Suddenly we could not get lawn signs and other stuff it was a joke.

Then I concentrated only on local races after that, and after a few years of those got disillusioned there too.

I do not know HOW we are EVER going to get out of Iraq, but there is only ONE real term that describes it right now. initials are C F.

WHAT a NIGHTMARE. I do not things are ever going to be the same, and the WTC thing was just the tip of the iceberg. I think the world has gone crazy.... and I know it happened a long time ago like three years or so ago but I think that hostage thing of that school in Beslan was just about the most disgusting act I have ever seen. For the rest of my life I will not forget the sick feeling I felt when I heard that story. Granted I was a new mom with raging hormones, but still. Terrible.

I am not sure WHO can fix all of this.

On a different topic, I can tell you that the IPlaw family would have no problem with the shaved cat. I had a cat that had to be shaved once myself. Her name was Fluffy, so it was even more silly.

And yes, Newt and his then-wife are indeed shaking hands. He's listening to his media advisor on the phone who is telling him how to actually look like he's being affectionate.