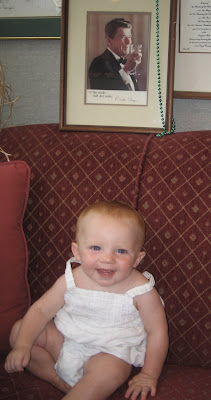 There’s a lot of things I do, but one thing I don’t do very often is watch television. It’s time to change that! The new fall tv season sounds super-exciting (if perhaps just a little derivative)! Celebrity Luvr has recommended the following shows slated to start in September:

1) Emergency Blondes! (CBS) Three attractive blonde women rescue people and animals from emergencies. They work for a mysterious employer who communicates with them through an employee named Crowley (played by Tom Bosley, Jr.).

2) Reagan Baby (Fox) Political scientists make a startling discovery when they find an infant who articulates Ronald Reagan’s political philosophies when she is seated near a photo of the late president. Queen Latifah plays the kindly, wise-cracking daycare provider who protects the Reagan Baby from those who would use her powers for evil.

3) Walleye Lake (Minnesota Public Television) This reality show pits several diverse anglers against one another as they catch, fillet, beer-batter, and eat some walleye.

4) Tyd! (Oxygen) I don't know what this one will involve. Any guess?

5. D For JD
A comedy program about would-be lawyers who read books instead of studying for the Bar and wind up living with their parents forever.

Deathly Hallows was awesome, no regrets.

Mrs. CL and I are wining and dining with the IP Law family and the new star of "Reagan Baby in beautiful Falls Church, Virginia. Queen Latifah declined the invitation. We are dining al fresco with homemade sangria, great cheeses and Cheerios for "Reagan Baby." It has been a very successful mini-summit between the CL and IPLaw families. We have been to the Washington Nationals game, toured the Washington Mall and now are out on the beautiful, outside deck at the IP home. Good Tydings to Tyd, her family, Osler and the Oslerites, and the entire Razor family. We also raise our glasses high to Riley. Thanks to the IP Law family for being great hosts. The only drag has been Patty Davis picketing the IP Law home with a sign which says "I'm the real Reagan baby." Photos to follow.

Well Thanks you guys, for toasting us and I hate to even admit this but we already have a new stupid dawg. I know I know Riley is still warm GAWD we are weak. But Spencer cried all yesterday and we did look around carefully. We went to the Oregon Humane society, but all of those dogs were really only good for homes with older children. So then today, we went to a pet fair that a rescue group was having at a Petsmart in Beaverton and we met Max, a 2 year old chocolate lab. Bill and Spencer both flipped over him, I liked this other dog better but in the end I really did not have anything against Max, just that he was kind of a spazz and licks me too much. I cannot stand those licking dogs but I am sure he will settle down.

Are you ready for this?? This dog we just adopted a family was renting a place and they just left town without any of their belongings or much stuff and get this they left the dog alone in the house and never came back for him!!! He had no food or whatever for like TWO WEEKS!!!

So we took him home, and renamed him "Boogie." I know its a kind of a weird name but its MUCH better than WInnie The Pooh.

The name is sort of in memory of a dog that Bill really liked
that JLH used to own but ran away.

Anyway, The thing with Riley went pretty well as far as these things go. It was sad and hard but we were all there with him, and after a while Spencer actually started to get a little bored, and he started looking at these cats that were up for adoption, which was good. Bill and I stayed for the whole thing and he fell right to sleep on Bill's lap on the floor. It was a pretty sad and emotionally exhausting day, but honestly, I would not have wanted Riley to live one more day he was really in pain and miserable. It was hard to let him go but he knows we loved him, and we had rescued him from a terrible situation and gave him nothing but love and affection for 7 years.

Boogie seems like he will be a good dog. He will do almost ANYTHING for a treat, so he will be trainable, and he is great with Spencer.

You MIGHT be able to Max/Boogie at this link: this is the site where we found him...

Tyd, when I had to put my boy, the absolutely most fabulous dog in the world down, I had to take a week off of work. Thank God that my manager said "absolutely". But I was living in L.A. Spencer needs a new dog. You guys are doing a great job in a rotten situation. I thought that Winnie the Pooh was a pretty good name. But than again, I'm a pediatric nurse.

Ginger,
Thanks, its good to know I am not the only one!

So many nurses on the Razor I never became a nurse but I did spend 6 years in nursing school finding out that I did not want to be a nurse after all. I had gone thru Pharm I AND II, allll of the pre reqs and allll the way thru Med Surg One. I even did gerontology. I tried hard to like it but my mom died in the middle of it all... I re started three times and then I met Bill and I had pretty mkuch decided to forget then anyway and thought it would be more fun to get married and move to CA so I did. This was after like 17 Liberal Arts major changes and 6 colleges. Finally after I married Bill, after 19 years, I finished my BS in Business/Marketing at U of Phoenix ONLINE because I could do it easily in the back of the guitar shop in the middle of the night or whatever, despite blaring bad renditions of "Smoke on the Water" from our customers. I had Juuuuussssstt finished and was figuring out what do to next when Boom GUESS WHAT??? you are going to have a BABY!!!!!
Along came Spencer Doodle.

AND I know that as hard as any job is,l being a parent is the hardest one OF ALL!!!!

SOMETIMES I wish I had stuck it out but I was pretty sure it was not for me. I Realllllly admire nurses though, because they are just amazing, most of them.

that is just THE SWEETEST baby..

I thought I was the ONLY ONE who had framed Pics of Republicans I have Barbara Bush and George and couple of others Of course I have no idea where they are now...