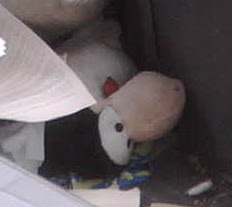 Having caught up with the East Coast Razor Reader gossip in the post below, I received this photo from Tydwbleach of their new dog, Boogie. Apparently, they sold their old dog, Riley, to some dog farmers. This new dog certainly is interesting-- I'm not sure what breed that is, exactly. And is that how you are supposed to carry a dog in a car, just kind of tossed back there with the old Cheerios and cigarette butts? Is that dog asleep, or just kind of stunned?

So, congrats to Tyd and brood on the new addition! (And don't let Donut feed him)

1 NO ONE in my family smokes.. No one I even know smokes anymore not even the musicians

2 that junk is just random stuff we have pulled from our house.. Bill gets stuff and throws it in the back of our van... that is an old bathing suit of SPencer's I intend to give away to one of the Merediths and the penguin bloom county doll thing is Bill's that he has had since forever and REFUSES to throw it out.

3. why cant the stuff you DO NOT really like blow up?

That van IS atrocious right now.. The STOW and GO seats help, but then you can fold them down flat whenever you want, like when you need to move stuff from your "Sploded house" to the rental house. BUT THen you NEver quite get the small things out and then they just kind of roll around in the back..

Add an 80 lb dog and a crazy three year old and you've got yourself a real mess.