Things we know about Tyd-- 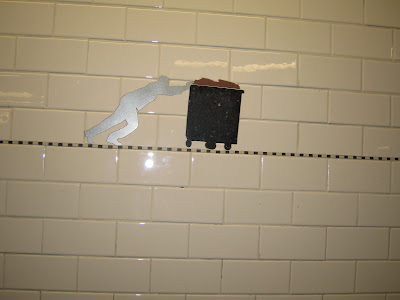 1) She has an enormous 140-pound dog.
2) She's a Unitarian, but apparently not scared off by the God-talk on here.
3) Her husband is a Luthier, and pretty good at Haiku.
4) She had lobster Newburg for her 3-year-old birthday party.
5) She also has a son named Spencer, who hangs with a buddy who goes by "Donut."
6) Her house blew up, and she still has a good attitude.
7) Now (after the whole exploding-house thing) she lives in a red van down by the river.

Comments:
Oh, I hope Tyd's new place doesn't feel like the red van by the river! Although they might be free of annoying scrutinizing neighbors that way . . . unless there is a red-van-by-the-river park.

8. She has an unparalleled Faulknerian wit. (Unlike Osler's Farlerian wit).

Well Our van is Grey and it does get a bit crowded living in there, esp with a toddler and a dog and Donut is constantly at our van. Also its pretty hairy in the morning when everyone is trying to get out the sliding door, trying to look their best all of us crowding around the rear view mirror.

About the annoying neighbor Well she is still being mean but I have now heard that everyone knows this about her and our landlord, Andy who we found out is a lawyer for the air force ( who may be deployed to Iraq AGAIN - so just be glad you are all being tortured by Olser in his classes.... it could be worse) knows about her too.

When I meet a mean person like this, what I usually do is make up a name for them that I secretly call them. Her name is Collette reardon, because she looks like Collette Reardon. COllette Reardon is a character on SNL a few years ago, created by Cheri oteri. She is this crazy woman who lives at the pharmacy and is just well you can see her on YouTube probably. Anyway My mean neighbor looks a lot like Colette reardon, and henceforth that is her name.

Now I just laugh at her.

So here is a good question: If you had to be ANY character on SNL,

1. Who would you WANT to be

3. WHo do you think Osler is the most like?


I will go first:

I would probably WANT to be Helen Manning, the JOYOLOGIST because she is so nutty. SHe was played by Molly Shannon and was always saying "I Love It" and throwing her leg up in the air.

2. My husband would say that I was this one character by Gilda Radner a million years ago who said nothing but just sort of looked around a lot.

I say that I would either be Ariana the Cheerleader (also by Cheri Oteri) with Craig the male cheerleader...remember the cheerleaders and they were not really on the squad? And they would just show up at like the swim meet or the chess tournament and do "The Perfect Cheer"

OR probably I am MOST like Was most like and still am probably most like Mary Catherine Gallagher, that crazy catholic School girl who sniffs her armpits and falls into things. Yep that is me.

3. As for Osler I would say that he is probably I imagine the most like that Bill Murray Lounge Singer character. I loved that guy esp when he was like on this weird gig like a singer on a train... or in an airport lounge....

My fav song of his: (sung to the Star Wars theme..)

Star Wars,
nothing but Star Wars
but if there Are Wars
let them be Star...

Yet another thing about me, Tyd that you might have already guessed:
I remember a LOT of stuff from TV which is probably the reason I am NOT a lawyer.....

I love that song. I even do sing it every once in a while. I think in the skit he was singing it on the Autotrain...

Now Osler, Your brother... he is Definitely the guy on keyboards played by Will Ferrel who is married to Ana Gasteyer... who plays Bobbie Mohan Culp You know the middle school music teachers from Altadena middle school? and they play songs like Sir mix A Lot"s " I like Big Butts.."

you know those two??? That is what I picture your bro probably is now...

Ok not really but honestly he would laugh so hard if you told him that.

Why do I think no one is going to respond to my poll? Uhbmmm maybe because it is STUPID?? BUT harry Truman said it best.... "The world is run by C Students."

but I hope they do it anyway.

Oh Bill just told me to tell you to tell Iplaw that he actually personally knows the Beet farmers. Whoever they are.

Osler and Iplaw in College:

Hey American Foxes, do you like my large yellow hat? Would you like come to our apt and drink some wine from a box?

You MUST have pics of yourselves in those plaid pants.

Basically, I'm Father Guido with a bit of Smigel thrown in. Liz is Judy Miller with a dose of the Candace Bergen character who interviews Mainway toys maker Irwin Mainway

No, the Prof. did not need to do the Czech Brothers act. Girls were a HUGE mystery to me in College. Still are, but for different reasons. I wouldn't have had the guts to put on a costume in College. And the Prof. didn't need to, he was already cool.

Irwin Mainway - a true innovator. The Bag O' Glass would warm the heart of any child on Christmas Day.

...It has a warning, careful kid, broken glass.

OMG, I may be mainway

William & Mary had a lot of very intelligent women and fascinating individuals, but not many American foxes.

IPLG actually had a date with an American Fox, but then he had her carry a trash can full of ice and ate her corsage and did some other stuff where she ended up going home in a police car, I think. He got way better at dating after that, though.

I would want to be Darrell Hammond as Sean Connery on Celebrity Jeopardy.

I am most like Lucy Brawn (Adam Sandler's Gap Girl).

I don't know about Osler, but sometimes his hair reminds me of Phil Hartman's Unfrozen Caveman Lawyer.

There are those who call me "Zog."

We've been over this before. The President of the Charge ate my flower. My date did NOT go home in a police car. And neither did I. I just got taken to the hospital and then the police station in a police car.

There were a handful of other American Foxes at W&M. A very sweet memory is holding hands with one while roller skating to "I Love Rock and Roll." But that was the only real contact I had with her. The Prof ended up dating her for a couple years though.

Osler reminds me a bit of James Downey (played Grayson Moorehead and the Change bank guy, wrote a ton of things)

Bill says I am Judy Miller.


Judy Miller was a girl who had pretend shows with guests and a theme show all in her bedroom. He show was called "The Judy Miller show." She was played by Gilda Radner rather spastically in a Brownie uniform she would dance and jump on th bed and periodically throw herself at the wall.. and then her mother would say "Hey Judy what are you doing up there?" and she`would meekly say "Nothing..."

Yeah that is pretty much correct.