A great idea for a new law school class! 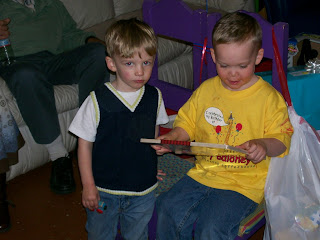 First of all, this is a photo of Spencer and his friend DONUT. Tyd has sent me a lot of pictures like this, but this is the only one with Donut in it. Anyways, that isn't the purpose of the post. Rather, the purpose of the post is to talk about this dream I had, one that may change the very course of legal education in our country.

Last night, I had a dream where I was wearing a very nice suit to work, because I was going to present Dean Toben with a VERY GOOD IDEA for a new class at the law school. I had prepared a notebook with photos and explanatory text-- I seem to remember that the class involved going places on a bus. However, I woke up as I was walking down those big stone stairs to the second floor of the law school, and I never found out what the class was!

So, what do you think it should be? It needs to involve the following elements:

1) Bus travel
2) Singing spontaneously, like they do in musicals
3) Writing to your favorite criminal or similar person of interest
4) An assistant, to help me teach and coordinate the class

Go to work, my friends.

"Baylor Traveling Law School & Pet Grooming - Get a Law Degree/ Trim your Lhasa Apso... WE COME TO YOU!!""

You need a biiiiig bus like those used by Musical acts, like the Judds. In fact, Maybe you could call them and buy theirs at a discount. They do not use it anymore! The pet grooming will be done by students to help defer the costs of their tuition. For an extra fee, the students will write a song and perform it about your pet.


OK I got up tooo early today. And that is not DONUT. That is biscuit. Donut has red hair.

IF I do not find a job soon. I will move there and be your assistant. Bill and I and Spencer - we can crash with you til we get our own place, right? He is no trouble at all....

I think clearly the message of your dream was that after I graduate, I should be hired as your assistant (6 figures, of course), since I am unemployed.

All the other details will work themselves out in the future, but in the meantime, I would be employed.

PS- I am willing to obtain a CDL if necessary to drive your bus.

If you put all these elements together, I think you get the Inquisition as depicted in History of the World, Part One.

Apparently, you have to drive to get there though.

This is very similar to my idea for learning the Federal Sentencing Guidelines only at 5 star resorts, isn't it? (You never replied to that email!)

I'd like to see an Antiques Roadshow style class where we roll up to different Federal Prisons and calculate guideline ranges of prisoners already sentenced, and well beyond any 2255 Motion limitations. When they (like the Roadshowers) ask if the range we find means anything (like cash money or a reduction in sentence) we can laugh and show them copies of Booker/Fanfan.

That is a cruel and unusual idea-- to go tell prisoners how their sentence was wrongly calculated, long after they could do anything about it... genius! Evil genius, sure, but you didn't go to three years of Evil Law School to be called "Ms." Hunter.

Well - you have to have Shirley Jones in it - she's in every musical. At least the ones without Julie Andrews. And, you need to ask her to borrow the Partridge Family bus cuz its so colorful - just like Danny Partridge. You need to throw in a few quick songs ("Did you ever meet a fella by the name of Osler? Osler? Osler? Osler? Osler? NO! He's a salesman! What's the fella's line? Never worries about his line! - Next station - River City Ioway!")and a few dance numbers with cowpokes dancing on rails. Then go arrest the child catcher, lock him in his prison wagon and set him up in a circus for people to throw rings on his nose. Then you can have your students offer legal advice on how sentencing guidelines do not apply to Nuns messing up Nazi cars. Finally, everyone breaks out their guitars, disguised as laptops, and starts singing...
"Call a lawyer and sue me, sue me shoot bullets through me. I love you!"

Then the curtains drop and you awake from your dream... wondering why you didn't run away with Kristin Chenowith before Matthew Broderick scooped her off her feet in the library... Oh yeah. You can't stand her squeaky voice when she talks! (But - Opie sure was cute in the original with Robert Preston and Shirley Jones!)

Red-- I'm not sure I follow all that, but it would be fun to film. It's kind like one of those stream-of-consciousness Cheech and Chong things, but with more singing. I think they only sang "Basketball Jones."

It should be a musical and I could write it and Opera Man could star in it.

OH, the lawyers and the doctors should be friends.......


or: from the Sound of Music:

"Plaintiffs and Judges and over ruled motions,
Juries, Attorneys and corpses in oceans
Armani suits and ties, shoes tipped with wings,
These are a few of my favorite things.

If your dog bites, if your floor's slick, if you're being sued,

Just pick up the phone
and call me day or night,

AND I'll help you nail this dude!

Don't get me started I could totally write it One of my hidden and funny but useless talents is that I can rhyme almost anything.

Red scares me with his knowledge of musicals.

All I know is some of the words from Spamalot and that's only because I saw the movie Monty Python and the Holy Grail several times.

IPLG - Don't worry. I'm a girl! And I have this major love of musicals and sing along without the records - er, CD's - epecially with one girlfriend whenever we are together. Fortunately, her children also love musicals. But, her husband puts on his headphones - not sure why that is! If I hadn't become a lawyer - and if I had one ounce the talent of Tall Tenor - maybe I'd have made it to Broadway... although I'd still be behind stage doing costumes most likely! I'm stuck singing in the car by myself! :)

When I was working as a packer for a moving company during college summers, my friend and I made up new words to "The Impossible Dream"... just for ourselves!

"To pack... the unpackable box!
To right... the unrightable crate!
..To try when your arms are too weary
To reach the unreachable jar!
This is my wish!
To pack up that jar!"

Maybe you had to be there!

Red, you are too kind! Next time you're at a stoplight, roll down your windows!

I love making up silly verses to songs we all know... heck, Wierd Al Yankovic made an entire career of doing that!!!

Well I hate to brag, but I am the Weird Al of Canby, Oregon.