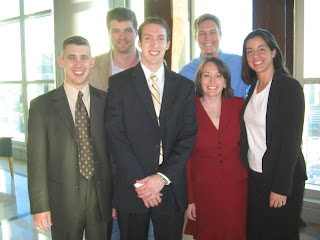 It is hard to describe how proud I am of my mock trial team. They did a fantastic job. In the semifinals, it turns out that they lost to the eventual champion by only one point.

At the banquet this evening, I spoke with Judge Shubb of the Federal District Court here. I actually argued a case from his court before the Ninth Circuit last year, so we had a good starting point of reference. He told us that we had missed the final by only a point, and while it was frustrating that the margin was so narrow, I was heartened by the fact it was basically a jump ball decision.

In the end, neither the plaintiff nor the defendant in the mock trial case actually exist. The next time these students try a case, it will involve real people. If this experience could improve their skills by just 4 percent, it will have been worth it, because the cost in real lives the next time is so high.

If you see Jennifer Seale, Heath Coffman, Dustin Sullivan, Lindsay Tanner, or Campbell Warner in the hall, congratulate them on a job well done, for they represented Baylor to the highest standard.

Comments:
Congrats! That is wonderful!! They represented our school well!!