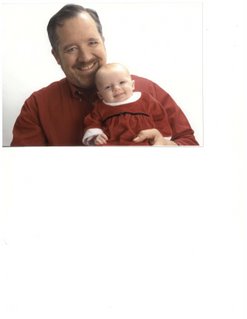 You won the haiku contest!

Unfortunately, the prize was meeting, uh, you. Which should be interesting. Since you and IPLawBaby and IPLawWife are coming to Waco tomorrow, perhaps I can fulfill this promise by telling you stuff about yourself. And I DO have some stories. Or perhaps if some reader wants to meet IPLawGuy, we can do that. I don't know. At any rate, here is his winning entry:

Zombies Attacked Me.
Bite My Arm. Matter Of Time
Till I Become One.

By the way, IPLawBaby, pictured at right, has the proper name of Dwight David Eisenhower IPLawGuy. He was born on December 1, 2006, and weighed nearly 12 pounds! He is named after his maternal great-grandfather, and is nicknamed "Scooter" after a close family friend in DC.

Comments:
Pretty sure that was Thomas' haiku? Unless they're the same person and IPLawGuy was accidentally logged in as his Thomas alter ego. Which would be extremely interesting.

A hacking victim
Yes I was. Haiku stolen
By Zombie Thomas

And of course, since my given name is indeed Thomas, (but only a few people call me that and one turned out to be not so nice) perhaps a Zombie has taken over my identity and enrolled at BLS.

Then again maybe not.

I'm happy to introduce myself to any and all while in Waco. Sadly, Prof. Osler has far more stories about me than I do about him. So don't look to me for dirt.

Eisenhower is her grandfather?

Osler I am confused. Again.

Still looking for jobs, interviewing like crazy. Maybe its chocolate factory time..... I was ACTUALLY asked what kind of tree I would be the other day.

I told him I was an Oak. Then Bill told me on the way home that was a dumb answer because that is the answer Katherine Hepburn gave BABAWAWA that one time.

I WOULD be an oak. Maybe a Chinese Maple. Or a regular maple.

So THAT is IPLAW, huh? So where is your ten gallon hat you were wearing in that one picture of yourself in that giant green car? Have you retired it?

Or is it in the Smithsonian, next to Osler's tux?

I was not wearing "Mr. Hat" in that photo. Rather, I took the picture. The hat was destroyed that morning, sometime before the float itself went up in flames in the middle of Historic Colonial Williamsburg due to "a spark from the catalytic converter."

My car, however, IS part of the Smithsonian. I believe the scrap was used for a snack bar table in the new American Indian Museum.

And my Presidential forebear was not Dwight. He was Clinton

Since Prof. Osler has yet to set a topic for today's Haiku-fest, I propose Zombie-themed Haiku.

Shouldn't today's haikus honor the arrival in Waco of IPLawFamily?

Ok I have to tell this story now that you have mentioned Colonial Williamsburg.

When I was a kid there was a family down the street and they had a daughter who was like way younger than me. Her parents were doctors and my Dad was a doctor and at least in our two families our parents would insist that we call the names for body parts by the correct anatomical names. I used to babysit this kid.

This kid used to play at our house sometimes and I would babysit for her. One time she was gone for a week or so and then when we saw her next, she talked to my mom and I. She said "WE were on vacation!" and my mom said, "Oh, how nice! Where did you go on your vacation?"

She looked at us and said, matter of factly, "We went to Colonial Vagina."

My mom and I laughed about this exchange for YEARS, so much so that we forgot her ACTIAL REAL NAME. I still cannot remember it and they moved away not long after this. For years after we would just think of it occasionally and say to each other, 'Hey - remember Colonial Vagina?"

I often wonder whatever happened to old 'Colonial.'

This comment has been removed by a blog administrator.

Tyd, you crack me up.