More Disturbing News About "The Candidate" 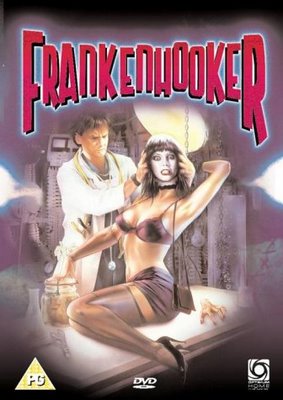 While, as I have said before, I welcome the campaign of Chris Frankenhooker to be the commencement speaker at Baylor Law School, I do feel compelled (as that school's ethics professor) to reveal known facts about his sordid past.

As we all well know by now, Mr. Frankenhooker styles himself as a writer, and indeed is slated to matriculate at the kinda-prestigious Butterworth School of Writing in Butterworth, Vermont in Fall, 2007. However, it appears that the candidate has been active in the artistic community for quite some time. Namely, the autobiographical dark comedy "Frankenhooker" was distributed very briefly in 1990, to the few theaters who did not perform due diligence in connection with coming attractions. While it appears that Chris Frankenhooker's involvement in the project was (under the barely-disguised pseudonym 'Frank Henenlotter') limited to writing, producing, and acting in the film, it still reflects on his character, I am afraid.

Desperate to recoup his investment in the film, Mr. Frankenhooker even ensnared golden-years thespian Bill Murray to write the promotional copy for the film. His tag-line: "If you only see one film this year, make sure it's 'Frankenhooker.'"

Comments:
This is great :-) The RNC should definitely hire you.

I will also add that my review of his writing indicates that he supports the terrorists and still operates under a pre 9-11 mentality.

In this time of war we need to stay the course and have another professor speak.

Frankenhooker was way better than the worst movie ever-- "Funny Farm" with Chevy Chase and Farrah Fawcett. Ewwwww.

Osler-- that kind of looks like you building the Frankenhooker in the photo.

Or I'm gonna get super laid after my speech.

You were young and you needed the money?

What I wonder is... what role did he play as an actor?

Actor? I thought it was a biopic about him.

Or maybe just a documentary.

Apparently, Mr. Frankenhooker thought he could keep this under wraps forever.

I do really like Bill Murray, though, and do pretty much anything he says, so I will see one move in 2007, and that movie will be "Frankenhooker."

I just noticed that "Frankenhooker" was rated PG. Wow! I guess they used to let more in, huh?

Farrah was in Funny Farm?