A new and even goofier contest... 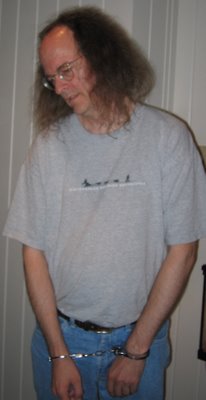 I have happened to come into possession of the 2004 literary magazine from a local high school. The truly terrifying thing about it is just how grim the poetry is, though it is often evocative and even pretty good. I mean, you would think these people are in law school or something! Here are a few verbatim snippets of these dark insights from several different poems:

"The elements forgotten,
Cannot ever be replaced,
As we live with greed and rot,
Our world will be erased."

"His metal begins to rust
Immobile, he keeps
That heart of mine
While I cry myself to sleep."

"There's no need to cry
The clouds do it for me
Expressing my depression better
Than I ever could."

Wow. I just kind of remember being excited about being able to drive a car. Anyways, here is the contest, which you can enter in the comments section below. Your entry can be in one of two forms: Either a grim high-school poem (no haiku, thanks), or a horrifying law school fable such as the tale of Prof. Bankruptcy and the severed head which can be found a few posts down. The prize is a copy of the infamous Osler "William Hung" Christmas CD from last year.

The principal asks
The teacher touched you where?

The wrestling coach says
Don’t be afraid to grab him.

The other night I walk into The Cryin’ Shame and who do I see? None other than Bates and the Dali Lama himself. Twelfth son of the Lama. The flowing robes, the grace, bald... striking. So, I'm bellied up to the bar with Bates and the Lama and I order myself a shot of whiskey. The Lama requests the same. Big drinker, the Lama. So the Lama is downing the shot and Bates spills his beer all over the majestic robes. Do you know what the Lama says? Gunga galunga ... gunga, gunga-galunga. So we finish the drinks, Bates cleans of the Lama’s robe and they turn to leave. And I say, "Hey, Lama, hey, how about a little something, you know, for the shot, you know." And he says, "Oh, uh, there won't be any money, but when you die, on your deathbed, you will receive total consciousness." So I got that goin' for me, which is nice.

They need A/v
Calling, always calling,
Help them set up projectors...
Only to be mocked.

Why is it I can't wear my cheerleader outfit
Or carry a doll
Or worry about
The onset of menses...
It is God's fault
I'm a boy
Does he see me cry?

I dug up my angst file and found a few gems-- this seems to be the angstiest:

Cant stop smiling no matter how I try
People smile back and wave as I go by
So many happy countanences
Friends white washing their fense ez
Plaid pants, middle class
Children playing in the grass
The teens ride by in their youth group van
Spreading the good word or asking for a can
Sally and Tommy, the American dream
Sweethearts meet and eat ice cream
And Everyone is perfect and everythings bright
Everyone is perky and no one seems up tight
Everyone is hopeful, everybody loves life
Everyone loves everyone and we all have a great time
I hope I never die

Oh my god I need some prozac
I flash to switch lanes and get the middle finger back
The jocks yell hey you fag
At the kid at school whos dressed in drag
We all have the guns, postmen carry bombs
Kids at school aren’t allowed to sing their psalms
More and more people spend their time at clubs and bars
Teens are smoking out and drinking and f***ing in their cars
Turn on the tv and check out all the sluts
Guys using date rape drugs, whatever for a f***
And everybodys pissed off everybody sucks
Everyone drinks and everyone f***s
No body really loves, no one needs anyone
Everyone likes you fine, youre good for a little fun

It seems as though I lifted some Beck lyrics in there, even.

Did you hear about what happened in Torts 1? Prof. Torts threw out the whole class yesterday, but they didn't get to just leave, he had a bus waiting outside, and then it took them to Dallas and they had to watch "Dora the Explorer on Ice" and all they got to eat was popsicles. This is rediculous how the faculty think they can humiliate us students by making us go to really lame ice shows because a few people don't do the reading. Plus, it wasn't even really Dora, it was this person in a big suit. Dora is supposed to be a kid, but this Dora's head was bigger than Swanburg's, it was like Sputnick. So you could totaly tell that it wasn't the real Dora, and the popsicles were some off-brand thing that had weird flavors like cauliflower and oat. I am going to make a page on the internet that tells people that if you go to Blayor Law School you will be treated bad and have to go to ice shows.

McKinney, that was beautiful. I cried. I laughed. I remembered wondering why they didn't put bigger wheels on the a/v cart so the thing didn't go haywire if you ran over a pencil.

Love, Luster
Shiny Stone
Yell, Scream
I alone
In my heart
A hole alive
Swallows all the sounds I cry

LOL. Okay, I have a True Confesssion: I was the editor of my high school literary magazine, which means that I wrote a lot of horrible poetry, and that I read and made fun of a ton of even worse poetry. If I can get over the pain that you just brought back to the surface, I'll submit something to your contest.

(Okay, okay, I was just "an" editor - I think I was technically the poetry editor? But "the" editor was never there, so my type A personality just took that as an opportunity to boss everyone around. I had an army of depressed slaves, it was awesome.)

It was not enough to you
To take my heart.
You had to put it in
A pool of your urine
With a picture of your new
Butt-head boyfriend, Ryan,
And my tears.

Did you hear what happened in PC 3 yesterday? Prof. PC said that if he called on one more person who didn't do the reading, he was going to shave their head. J. Hill and M. Vahalik and that one girl in the way back all got their heads shaved, and then Prof. PC made them put on Hare Krishna robes and wander around in the parking lot handing out tracts and the Baghavid Ghita to prospective students. How are we supposed to put up with this? The administration must act!

Now THIS topic is going to bring back the ol' repressed memories!

I don't want their friendship
Or even their respect
I just wish they'd be nice to me.

I'm not so bad a guy
But I can't even get their pity.


--But I would never have written this in high school. I'd want to make sure everything rhymed... like a real poem, not one of those weird free form things.

There is a man in the moon
He is crying
It is your fault.

He sees the black knife in my heart,
Which you put there
Last Saturday.

Lies, hurt, sadness, feces
Give me back my cd's.

OK, now you've really got me going on the repressed memories from high school. And since any "real" poem rhymes, here's one that I might have written in 1978. If I was into that sort of thing, which Thank Goodness, I was not:

Defeatism, social unrest
The Soviet Bear is more than a pest

Does anyone care about our place in the world?
Or will the flag of freedom slowly be furled?

I don’t understand me
but they should.

I don’t love me
but he should.

I don’t acknowledge him
but God should.

I especially like the part where everyone has a gun. Uh, what high school did you go to, exactly?

Trinity School of Midland... it's Episcopalian. Rather than bar mitzvahs or Sweet 16's we had gun parties, but that rite of passage was usually at about 6 or 7. By 16 we all had small arsenals, and sometimes ppl brought them to school to show off- like show and tell. No injuries, and no one seemed to think this was irregular. I also distinctly remember crossbows and potato guns at school.

BTW, what's with this never ending supply of photos of Bates in bondage? Does anyone else find this a little disturbing?

I want to scream!
To empty myself of this feeling
Yet I can't
Not here
Not now
So I sit quietly
My heart pounding
My eyes watering
And no one will ever know. . . .

Who am I?
Know one knows,
For my face never shows.
I keep it hidden,
deep inside,
It’s not the only thing I hide.

My walls are up,
My courage down,
My face fixed in a permanent frown.
My mask is on,
It won’t come off,
I’m too afraid that you will laugh.

I can laugh,
And I can sing
But you would never know these things.
No one ever,
Gives me the chance,
To laugh, or sing, or even dance.

My walls are up,
My courage down,
My face fixed in a permanent frown.
My mask is on,
It won’t come off,
I’m too afraid that you will laugh.

Man, that one is totally depressing. Are you actually in high school?

At least Bambi's mother loved him

The students there pretend to learn
The teachers pretend to instruct;
Its the janitors that want to go back
Theyre the only ones that give a ****.

Big Hat
Big Truck
No Cattle
What is that Rattle

Is it the Wife
Give me a Knife

Who should Go
Me or the Ho

My contribution to angst-ridden poetry day (from my e.e. cummings period):

prom is in five weeks
and no one will go with me
oh! the yearning, the terrible yearning
will it never go away
and the cold showers don't help

RE:
Mark Osler said...
Man, that one is totally depressing. Are you actually in high school?

I am not in high school, surprisingly I survived and made it to law school. But I was in high school when I wrote that one. I felt like the saddest "happy person" ever.

The air breathed wet schnauzers. She stood there
her dress the color of Windex,
and looked into the distance
and said:
"Stalin. He was like so MEAN to people. ANd that wasn't even his real name."