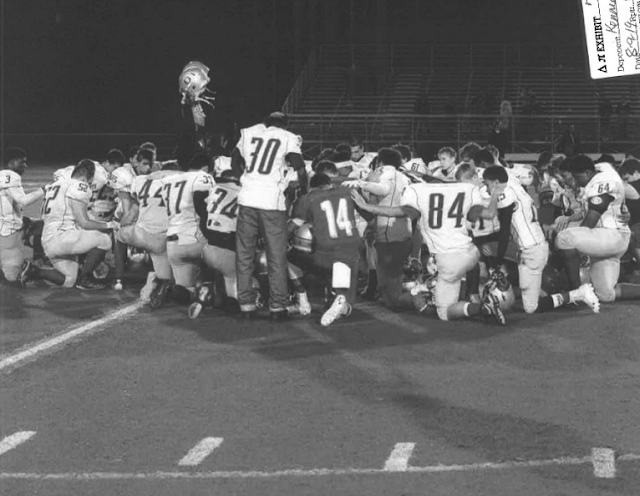 The Supreme Court continued their week of creating turmoil by deciding the case of Kennedy v. Bremerton, in which a football coach was fired for praying-- and leading prayers-- in the middle of the field after games. It's a weird case, in which the majority (exactly who you would expect: Gorsuch writing for Thomas, Barrett, and Alito, with Kavanaugh concurring) pretended that all the coach was doing was quietly praying to himself after everyone had gone home-- something anyone can do, supposedly.
In a pretty stunning development, Justice Sotomayor wrote a dissent in which she included the photo above-- of the football coach surrounded by players as he prays.
The justification, of course, was that participation was "voluntary"-- which completely ignores the power dynamic between a football coach and the players, one that often includes "voluntary" workouts.
It's a terrible precedent that will allow for all kinds of rule-bending in public schools by those who imagine that this allows for "voluntary" prayers before class, etc.
# posted by Mark Osler @ 1:00 AM

Comments:
This reminds me of our high school days and the FCA. I was a member but in retrospect I don't know if I joined because my friends were all taking part or because I was searching for what I might need in my life.

It was in the evening but it was run by two very popular teachers/coaches. I don't remember any pressure to join or participate. I would guess I joined because I was trying to be with like minded friends and most of my friends were involved in HS sports.