Big Changes in the Minor Leagues

Minor league baseball is pretty important in much of America, in those spaces between the big cities. I love going to minor league games when I can, and I even have a favorite minor league team (the Richmond Flying Squirrels). 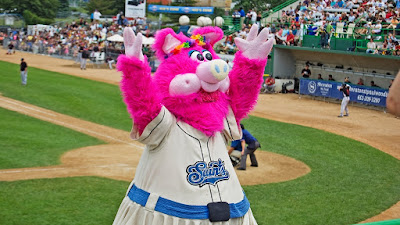 There were big changes in the minor leagues this year as MLB restructured the whole thing, and raising the pay for the players. At the top level, AAA, they have moved many teams closer to their parent team, to reduce travel time. Here in Minnesota they brought the AAA team really  close by taking over the St Paul Saints (a team founded an co-owned by Bill Murray).
The downside of the restructure-- and it is a serious downside!-- is that the number of teams was cut from about 160 to 120, so now there are just 4 for each MLB team. The teams that were cut, like the Kane County Cougars, are mostly shifting to "affiliated leagues" like the American Association where the St. Paul Saints used to play.
At any rate, here are my favorite Minor League team names (besides the Flying Squirrels):
Lehigh Valley IronPigs
Jacksonville Jumbo Shrimp
Albuquerque Isotopes
Amarillo Sod Poodles
Binghamton Rumble Ponies
Akron RubberDucks
Rocket City Trash Pandas
# posted by Mark Osler @ 1:00 AM

Comments:
Not the Lansing Lugnuts?

I have a cap for the Clinton Lumberkings

One of the best parts of summer -- watching the Bulls play! I'm eager to check out the new Frederickburg Nationals stadium too!

Jeez Mark ... what about your beloved AA (SF Giants) Richmond Flying Squirrels???? I got pictures. You and Nutsy, the Squirrels mascot ... and maybe you and Natasha. Pictures. And there is all the swag ....

I mentioned them twice!