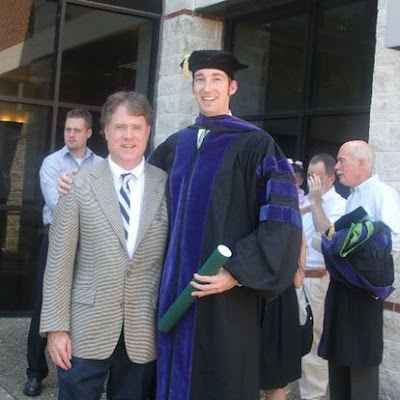 I'm devoting Wednesdays to profiling some of my former students, alternating between Baylor and St. Thomas law schools.
I'm pretty sure that Matt Fass is the tallest student I've ever had, and also one of the best.
Based on his performance in my classes, I had him co-author an article with me, and a very important one: the first one in which I ever suggested reviving the Ford Clemency Board model in our own time (an idea I am still pushing). If you are interested, you can download and read it here.
After law school, Matt went to work as a prosecutor, first in Wichita County (right up along the Oklahoma border) and then in Harris County, which is mostly Houston. For about four years after that, until 2018, he worked defending people accused of crimes in Harris County.
And then he swerved. Hard.
After a short period working as a flight instructor, he became an airline pilot! He currently works for United Express out of Houston, flying to places ranging from Lake Charles to Memphis to Mobile to Albuquerque.  If you are interested in such things (and I am), you can see their route map here.
And that, my friends, is a swerve!
# posted by Mark Osler @ 1:00 AM