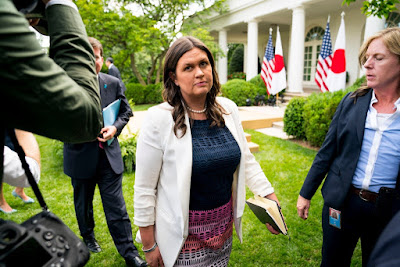 This week, White House Press Secretary Sarah Sanders and her family were refused service at the Red Hen Restaurant in Lexington, Virginia. (Many reports said it was a "DC-area restaurant," but the last time I was in Lexington it was at least a few hours down the Blue Ridge from DC).

According to Politico, "Stephanie Wilkinson, the co-owner of the Red Hen, told the Washington Post that the decision to ask Sanders to leave came after conversations with her staff. Wilkinson said some of her staff members are openly gay and were aghast at the Trump's administration's push to ban transgender service members along with the fact that she believes Sanders works for a 'inhumane and unethical' administration."

Is this justifiable? I don't think so.

Well, let's imagine that the owner had decided to stand on now-established legal ground and said that her religion forbid her from serving Sanders.

While that would be kind of a sweet turn-around, it also reveals the problem with refusing Sanders her locally-sourced meal.

LGBT people should be able to eat  (and buy cakes) where they want.  "Religious belief" shouldn't cause us to to reject or turn away those who are different than us. Rather we are called to embrace and engage the fullness and breadth of this world, even if it makes us uncomfortable.

I do realize that being an administration functionary is not an immutable characteristic, but a choice. Those who agree with the Sanders rejection are right when they say that it is more justified to exclude those based on what they do rather than who they are.

My point, though, is about the larger question of hospitality by those who choose the Christian faith. [And note that I am moving to generalities now-- I don't know anything about the faith or principles of the Red Hen owner other than her admirable respect for her LGBT employees]  Christian inclusion should encompass LGBT people, regardless of what the law says. It should also encompass those we disagree with politically.

I am saddened by the ascendance of "Jackass Christianity," where people define their faith more by who they reject rather than by who they love. It is the opposite of Christ's example. These are sub-groups of those who oppose LGBT rights or vilify the administration, of course, but it does seem to define the religious identity of some Americans in this troubled moment.

Within and without spheres of faith, there is too much pushing away right now. I cannot celebrate more of it.

Comments:
I think what we're seeing now in this country, as exemplified by the events at this restaurant, is a failure of the center to hold.

I love this. Thank you!

"What Would [Martin Luther] King Do?" Perhaps the restaurant owner considered it an act of peaceful resistance in support of the oppressed. I'm not oppressed, so I'm slow to judge what she felt necessary for her and her staff.