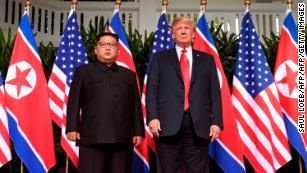 This week's meeting in Singapore between President Trump and North Korean strongman Kim Jong Un is being roundly criticized. In a nutshell, most commentators are focusing on these points, all of which seem based on facts:

-- It is wholly hypocritical for Trump to approach Kim the way he has-- and rely on vague promises-- when he rejected the Iran deal as not strict enough.

--Though it may have been discussed, the focus was not on human rights abuses in North Korea.

-- And, most commonly, pundits are noting that Trump seemed to give something up (war exercises in and around Korea) without getting anything.

I get all that. Yet, I am hesitant to criticize Trump on this one (there is a lot else where I don't have that problem). Here's why:

During the Obama presidency, I hoped that President Obama would do two things. First, stop the military exercises in and around Korea. To me, they always seemed needlessly provocative. Second, begin a dialogue without preconditions, just to establish a relationship. Without that, we have no real way to inveigh on human rights and other issues.

Now Trump has done exactly that.  It's confusing, and certainly contrary to other things he has said and done, but in this one area, what he did is what I hoped for.

In the end, if someone switches over to my way of thinking, the last thing I want to do is accuse him of being a hypocrite! Rather, it's better I think that they have begun being reasonable...

Comments:
Doing the right thing for all the wrong reasons is still the right thing to do.
Only a far right President like Trump could get away with what he has done without being trashed as a traitor. This is a really good first step. I don't believe that he will ever, on his own, seek to bring human rights and nuclear disarmament to North Korea.

Hopefully some one will follow through on the important stuff.
There will be a lot to work out. North Korea has over a million citizens on the payroll in the military.They all can't work at the new McDonalds that we will be bringing over. The normalization of North Korea will be a long process, full of opportunities to screw up. If they can keep Kim and Trump proudly chatting away on the sidelines there could be some good happening.

I think I agree with you. I've always wondered why those joint military exercises were seen as so untouchable by the U.S.

I just wish Trump hadn't been so overtly flattering of Kim Jong Un. When I saw pictures of the two shaking hands, I finally understood how much it legitimizes Kim Jong Un for the two to meet in person. Somehow, I'd never completely understood that argument against a U.S. president meeting in person with Kim before.

Maybe it wouldn't have bothered me so much had it been Obama; I don't know. Because Trump's behavior to Kim is the latest in a long line of his being more solicitous to dictators than he is to allies, seeing him laughing with Kim Jong Un and praising him was harder to take.