PMT: Three things Donald Trump should do to restructure clemency 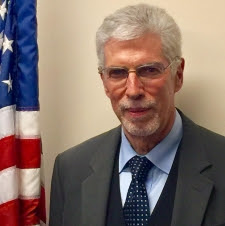 The United States actually has an official with the title "Pardon Attorney." The current Acting Pardon Attorney is Larry Kupers, pictured here. Kupers is actually a great pick for the job; from my encounters with him and his hard-working staff, he is doing things right. I admire him and his two predecessors, who dedicated themselves to a thankless job that should matter a lot.

However, it doesn't seem to matter much right now. Kupers's work isn't going anyplace, from what anyone on the outside can tell. His office makes recommendations upstream to a number of other decision-makers (more on that in a second), and there the pipeline is clogged.  Over 10,000 cases remain pending. Meanwhile, none of Trump's grants of clemency appear to have come up through that process (though it can be hard to tell from the outside of this opaque process).

The formal clemency process is supposed to work like this:

Think of it a pipe with seven valves, each operated by a different person. Those people are usually inclined to keep the valves closed (you only get in trouble, after all, if someone gets out and commits a crime), and some of them have a lot of other jobs to do. Sometimes one of the seven is just gone altogether when a position is vacant.

As you might expect, that system does not function very well, except in the very rare circumstance where a President forces each portion to work in league to keep the valves open (i.e., the last months of the Obama administration). Too much bureaucracy, sequential review, negative decision bias-- it's a disaster. The current Deputy Attorney General and White House Counsel have way too much on their plate to care much about clemency. My guess (and it is only a guess) is that the review pipeline is completely obstructed, or nearly so, at those chokepoints.

And now, Donald Trump has decided pretty much to ignore that whole formal process (and the people who have trusted it and submitted a petition). Instead, he meets with celebrities (Alan Dershowitz, Sylvester Stallone, Ted Cruz, Kim Kardashian) about individual cases or sees an appeal on Fox News and takes action.

In the end, I hope that President Trump gets rid of the non-functioning formal system and frames up a new one that incorporates three aspects of his informal process. To play out a little more of what I pitched to the BBC yesterday:

1) The new process should be outside of the DOJ, which has irresolvable conflicts on clemency questions (and some other functions, as Rachel Barkow and I have argued).
2) He should be advised by someone he knows and trusts.
3) He should meet with that person in person and regularly.

Of course, this is only worthwhile if this better process is open to all-- and not just to celebrities and those who know them. But... that's possible, right?

And, that new person would have to be given the money and resources to clear the huge backlog of cases.

It could happen. And if it does, it would be better for this administration and all that follow.

Comments:
You are right, the process seems long and full of pitfalls and seems very broken. Who
needs to initiate changes to the process? Keith Ellison? Who created this convoluted process in the first place?


I am wondering if the latest recipient had an application in the the pipeline. I know that Martha Stewart, a name floated for possible consideration, does not. At the very least the person receiving the pardon should have actively sought one in the first place. Is everyone suddenly going to enlist a celebrity instead of an attorney to further their chances of receiving said pardon?

I wonder if he should hire Kim Karshashian to put his trusted adviser. I mean, we know he will meet with her often, as he loves attention from (pseudo-) celebrities. And she has already succeeded in convincing him to commute a sentence for somebody. Or maybe Sylvester Stallone. But an attorney with expertise in the field, nah, that won't work.

Sadly, no, it hasn't worked. At least when that person is buried deep in a bureaucratic morass.