Philandro Castile and the Jury 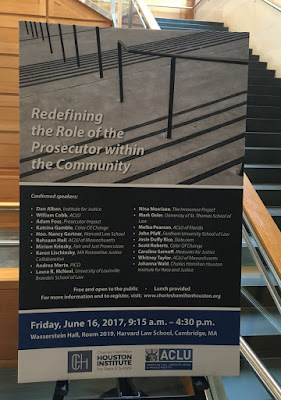 Yesterday I was at Harvard Law School to speak on a panel about prosecutors and the need for reform.  Just as we were finishing, the news broke from back home in Minneapolis that the jury had come back in the manslaughter case involving police officer Jeronimo Yanez, who shot motorist Philandro Castile to death during a traffic stop.

The jury, after five days of deliberation, came back with a not guilty verdict.

I didn't follow the trial, largely because I have been out of town. I don't know what evidence was presented, and what defense was advanced. I do know that I lot of people I respect are upset about the verdict.

The prosecutor in this case, Ramsey County DA John Choi, did what could be done-- his office took the case to trial and seemed to vigorously pursue the charge.

Generally, I am deeply troubled by the use of lethal force by the police. Too often the cost is unconscionably hight-- death-- in cases where either officer safety was not genuinely at issue or there could have been other ways to secure officer safety. Our society needs to talk about these hard questions, and think about equipping our police with different tactics, weapons, and knowledge to prevent tragedies like the Castile case from happening. Part of that needs to be an explicit discussion of race.

I know that a lot of people would like to simply conclude that racism does not come into play in police shootings. But... wouldn't we all agree that there is still racism in the US? And if that is true, must at least some of it infect police forces, given how many police officers we have in the US?  It is naive to think there is no racism in US policing. And if it is there-- and it is-- we must find it and root it out.