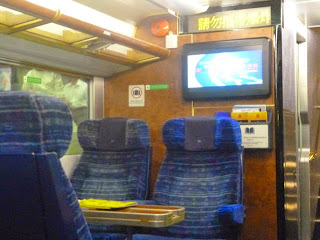 After the terrible accident on Amtrak's key Philadelphia-New York corridor recently, there have been some interesting discussions about the future of rail transit in the U.S.A.

China, as many commentators have noted, has built a remarkable network of high-speed trains, which now are used by over 2.5 million people a day. They have the largest system in the world-- in fact, more high-speed lines than every other system combined.

The train I took, from Hong Kong to Guangzhou, was a conventional train, one of 12 a day traveling that route; the high-speed line connecting those cities is now being built.  Still, it was plenty fast, very comfortable, and cheap.

I've always loved trains, and have crossed the continent on both Amtrak and VIA rail in Canada.  I think it is especially worthwhile on crowded corridors like Chicago-Milwaukee, Boston-DC, and Seattle-San Diego.  As a nation, we seem to cycle regularly between considering a broader use of high-speed rail and cutting back on the train service we already have.  Most recently, Congress was voting to cut funds to Amtrak just as the accident near Philadelphia happened.

Should rail play a bigger role in the U.S.?

Comments:
I keep hearing 2.5 million people per day in China riding the train. I am not good at math (seriously), but doesn't this translate into somewhere around .25 percent of their population? Again, legit question, let's say we really get serious about doing this correctly and we are as successful as China, what is the right investment for something that is going to serve about one quarter of one percent of our population?

Regardless of the population base, it a lot of people! In this country, we spend billions on things that serve a far smaller part of the population. For example, Interstate highways in North Dakota, maintaining the inter-coastal waterway, beach maintenance in affluent areas, the University of California educational system, etc. It's a question of what benefits spin off from that. With railroads (if they are decent), the benefits enjoyed by non-riders include less traffic on the roads and less pollution.

Right. I hear you. Totally agree with your logic. But, again, my non-gotcha, totally serious question, what is the right investment for this well-intentioned national goal? What are some of the things we should cut back on in our federal budget, for example, to free up some Amtrak funding or, even more ambitious,a high-speed rail project that links Houston and Minneapolis?

Trains and excellent public transportation will remain a dream in America as long as we continue to think small, short term and only for ourselves. Public transportation requires considerable subsidies to be affordable to those who need it the most. Like so many other things that a great nation should do, this probably won't happen in my lifetime.

WF-- The easy answer there is to cut down on the subsidies for drilling. With Amtrak, too, it would make sense to focus on heavily traveled corridors and reduce cross-country lines. Houston to Minneapolis would not make the short list of priorities, but Houston to Dallas sure would.

We have all spent that $4 billion dollars (and really divide it by two because it is probably actually in our interest to fund the independents ) many times over. You and I are united in our wish that Congress will someday put its foot down and zero out that particular "talking point subsidy" to the Big Five. But, in a federal budget that borrows $500B in a good year, $4B in savings (less than 1 percent of our annual deficit; 0.1 percent of our annual budget), that morsel won't get us too far building railroads.

Having said all that, I am not averse to some real building projects and infrastructure maintenance and some creative thinking (and perhaps railroads might be an important part of that). But right now all the leading proponents of that kind of forward thinking are mostly good at demagoguing but not good at persuading and actually envisioning practical plans that might attract real support.

True. I guess the problem is that the money-losing routes are supported by the members of congress from the states being served, even at a high level of subsidy. As I understand it, Amtrak makes money where the demand is there (in the Northeast).

That's all well and good. I am going to share my anecdotal criticism of Amtrak. I live in San Diego. Often I travel to LA for work (a potential "high-traffic" corridor as you might imagine). Amtrak has a commuter line between the cities. The fare is $26 and there is "free WiFi."

Pros: The train ride takes about the same amount of time to drive with none of the stress of fighting (3) hours of California traffic each way. It's cheaper than a plane ticket. Business class ($18 extra each way) has free beer and wine.

Cons: When you add in ($) parking in SD, ($) two taxi/uber rides in LA (to and from the station), the cost of a train ride is about 150% of what I would spend in gas. The "Free-Wifi" cuts out every 2 miles and is dreadfully slow. So I have just enough time to connect to the wifi, attempt to read and reply to an email, only to hit "send" right as the "connection diagnostic" program starts up.

After two train rides, I now drive to LA instead, fighting lunatics on the roadway for (3) hours each way. It's cheaper, I have my own car when I get there so don't have to pack any bags, and can come and go as I please (instead of sitting around the train station for the next departure). If they would fix the stupid WiFi, I'd probably still be taking the train because that extra (3) hours of actual working time each way would be worth the ($).

Another anecdote. I tried to take a cross-county train once. I was going from Florida to Southern California. The train tickets were 3x as expensive as a Southwest flight, and the trip would take two days. And I would have an over night in Chicago. No wonder it would take two days if they're driving me almost all the way to Canada in the process.

Despite what we all like to think about mass transit, a train is a pretty inefficient way of moving people. It is inflexible (compared to cars) and slow (compared to airlines).

The trains' advantage is scale. It can move a lot of things in one trip. But that's unsuitable for commuter traffic (which is why commuter air travel is done on "puddle jumpers"). So cross-country is where a train can really shine right? Well no because it's only about as fast as taking a car, and more expensive. Where does "scale" work well and speed isn't a factor? Freight. Freight also doesn't care if the WiFi works or not.