The one best moment 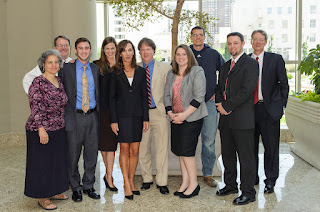 As part of first-year orientation, we put on our Trial of Jesus in the atrium of St. Thomas Law School. Joy Tull and I prosecuted, and Sara Sommervold and Jeanne Bishop defended Jesus. We had some stellar witnesses this time, including Phil Steger as Simon Peter, David Best as the Rich Young Ruler, Prof. Jerry Organ as the Centurian, and Susan Stabile as the woman described in John 8. Prof. Hank Shea was our wonderful judge.

Some of the elements of prior trials were there-- for example, Jeanne was a strong, calm advocate, while I projected something more like the style of Dwight Schrute. However, there was something stunningly new, that will change the way I think about an important part of the gospels.

Susan Stabile's portrayal of "Susanna" was simply stunning. You can, and should, read her description of the experience here. However, what she does not describe (and can't) is what it was like to watch her testify.

As she began to speak, there was some kind of transformation-- she became very small in the chair, and her voice changed to one that was both chastened and awed. Her memory of the experience was intensely physical, as she described being thrown to the ground, waiting to die, and then seeing the stones dropping instead. At one point, she looked over at Derek Hansen, a few feet away, who was portraying the defendant, and in that still, small moment he really was Jesus. It was startling and real.

Sometimes, that happens. It did yesterday.

Comments:
As I listened to this song this morning (which was linked on something else I posted), it occurred to me that this is the song of the woman in John 8 after her encounter with Jesus: https://www.youtube.com/watch?v=VPpd-6X3tEo&feature=player_embedded

Mark … what a remarkable way to orient new students and future lawyers to the law. I trust this is a gift of grace and context, given you are at St. Thomas. And Susan’s reflections were quite powerful. I envy your students.