Easter Reflection: Jesus among us 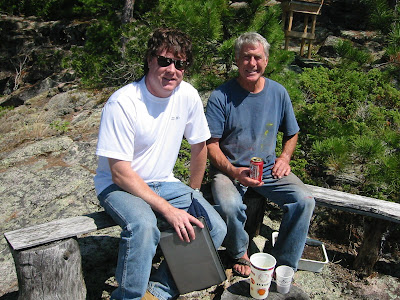 I have a friend who who will be camping out with family this Easter morning. That seemed an odd tradition to me, until late this week.

This past Thursday, my church did our annual "Easter Walk," where the children of the church are led through the recesses of the building to encounter various parishioners playing the roles of people who encountered Jesus during holy week (and beyond). I was asked to play the role of Peter. Specifically, I was Peter after Easter (John 21). He and the others went fishing in the Sea of Tiberius, and caught nothing, until a stranger on the shore yelled to them to cast the net on the other side of the boat. They did so, caught a net full of fish, and headed to shore. As they got close to shore, it became clear that the stranger on the shore was the risen Christ.

When they got to shore, here is what Jesus said to them: "Come and have breakfast."

So they sat by the shore and cooked up the fish.

That's what they did-- exactly that. They simply had breakfast together by the shore. There is something so profoundly familiar about that, so real and true... so knowable and yet moving. I love the image of that, them by the fire, cooking the fish, this incredible miracle of resurrection melding seamlessly into what is a part of us all.

Isn't that how Christ comes to so many of us? Not on billowing clouds or with a booming voice, but a quiet voice of comfort, of challenge, a voice amidst tragedy that tells us simply to come and eat, and be who we should really be.

Comments:
This role could be your big break into acting, or possibly commercial fishing. I suggest talking to some producers of The Deadliest Catch.

I have a question about what Baptists believe: Do you believe that Jesus still has His resurrected body?

I ask because of the different creeds that I've heard that talk about God being without body, parts, or passions or that say He is a spirit.

I have never once heard that discussed! I would imagine people have considered that, but within Baptists there would be no one answer on something like that.

Thanks. That is very interesting. What's your personal belief?

My mother's family always went camping on Easter. My Grandpa, who faithfully attended every other Sunday of the year, said it was to make room for the Easter only folks.

Luke's gospel also reports a resurrection meeting over a meal after an afternoon walk. Communion, long before it was a ritual, was simply a shared meal encountered at the table and not the altar.

That is one the many theological questions for which my answer is "I don't know."

As I get older, that seems to be my answer to more theological questions, even as my core faith becomes stronger.

Thanks for answering my questions. I do appreciate it.