Hope, Fruition, and the Loving Mob 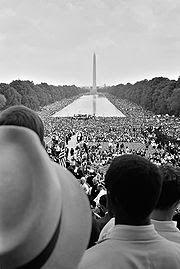 There was much to remember in today’s inauguration, but the most lasting image may well be the attendance of America, so much of it, at the inauguration, that great mass of people stretching from the Capitol to the Lincoln Memorial, around the Washington Monument and beyond the black mirrors of the Vietnam Memorial.

Change rides on the shoulders of crowds, for good and for bad. Evil can act through mobs, as in the lynch mobs that carried a man to death without trial or sentence. Sometimes, though, a loving throng lifts up a man for good, and this was one of those times. Over a million people stood on the mall in Washington today, in the cold, without a view of anything but the person in front of them, and held up Barack Obama as a new leader in trying times. A million people stood in unity there, just to be a part of it. For the first time, probably, a million people stood together and listened, even, to a poet they had never heard of. 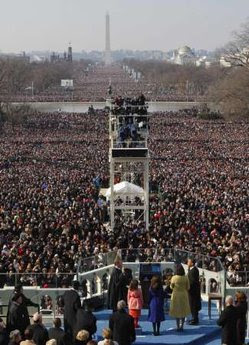 There was a beautiful symmetry, too, in that enormous crowd. It was at the far end of the mall from the Capitol steps, in front of the Lincoln memorial, that Martin Luther King, Jr. addressed what then seemed like a huge crowd of 200,000 facing the other way on that same mall. On a sweltering August day, King said that “ In a sense we have come to our nation's capital to cash a check. When the architects of our republic wrote the magnificent words of the Constitution and the Declaration of Independence, they were signing a promissory note to which every American was to fall heir. This note was a promise that all men, yes, black men as well as white men, would be guaranteed the unalienable rights of life, liberty, and the pursuit of happiness.”

Today, part of that check was finally cashed, having laid latent from August 28, 1963 until now. The promise of equality became much more real. A black man was inaugurated as President of the United States, with the potential to succeed or fail on his own merits. Certainly, the inauguration reflected a striking victory for Barack Obama and his political talents and ambitions, but I sensed in that crowd something more than just reflected glory. It seemed that who was really being inaugurated was that crowd, that flowing river of Americans from Lincoln’s feet to those of our lawmakers, a human chain tying together the stoic determination of Lincoln, the brave oratory of King, and the victory that was celebrated today. The only thing that could tie that all together, link the dreams to the fruition, was nothing less than the American people, and I’m not sure I have ever seen anything more beautiful.

That's cool-- the pictures are from opposite directions, looking towards one another.

I liked that poet person. Her poem was great. Aretha has looked better.. but she sang from her heart and she sounded fantastic, despite her goofy hat. I LOVED the music that was played, I can't believe everyone sounded so great even though it was like a gozillion degrees below zero.

As someone who had been a child of the south (North Carolina and Georgia) during the 1950's, I found myself getting completely overwhelmed and teary-eyed while watching the inauguration today.

Obama's speech was not only a triumph for the rights of all people in the U.S.; it was a healing moment for my home state. I well remember whites-only fountains and segregated train trips to Atlanta. Even as a kid I couldn't understand it. As an adult it shamed me to be part of a bloodline that once--long ago--owned slaves and, even worse, in my own lifetime, left a beloved church when it decided to allow African-Americans to attend service.

Today there was a lessening of that shame ... and a wonderous hope for what might come next.

Beautifully said, as always, Mark. I got teary-eyed whenever they showed that courageous Civil Rights warrior John R. Lewis, his scarred bald head and Old Testament bearing are a glorious tribute to the indominable spirit of so many living and dead who celebrate this day.
RFDIII

I'm glad Osler wrote this, because I am too pooped after going down on the Mall today into that sea of humanity to write anything, and he said it better anyway.

In answer to the previous post, we were standing (actually perched upon) part of the World War II Memorial, next to the Arizona pillar, facing the "back" side of the Washington Monument. That's where we ended up after walking the 2-plus miles from my apartment in Woodley Park. It wasn't so crowded there, and we had two Jumbo-Trons in front of us.

I was shivering the whole time, from the cold but also in anticipation. Everybody in the crowd was, again, really nice and really happy. There were unintentionally funny moments, like when Dianne Feinstein would say "Please stand" or "Please be seated," because everybody was already standing, or guarding wherever spot they happened to have found a seat.

But it was profound, in a very very simple way, to be part of all those people walking cheerily to the Mall from all points, in numbers that swelled gradually and then rapidly, as we all got closer to the Mall. That was maybe my favorite part, simply walking to the Mall in the morning, because everybody was going for the same purpose, and there was meaning in that.

And the sense of release when Obama finished the oath, the finality of him saying "So help me God." That was terrific, too.

Okay, one last thing: I kept thinking, during the speech especially, of four years ago when Bush got elected the second time. I was working at an international school in India, in a pretty remote place with kids from all over the world. It was a big deal for us to get to watch the debates, but we did, and everybody on campus was hanging on the Bush-Kerry contest.

When Bush won a second time, I was at such a low point: (and okay, I'm gonna get really partisan here): the House and Senate were majority Republican; everybody was worried about Bush getting to nominate more than one Supreme Court justice, and it just seemed like the country was descending into a place that wouldn't be the same for the next hundred years, a place I didn't think I wanted to live anymore. I was so, so depressed that we would elect Bush a second time.

I kept remembering that November of 2004 today, and how I would never, ever have foreseen what happened today, what happened in November 2008. I was still pinching myself today, that it was real and that I was back, very happily living in the US. No, it's not about me, but it made me realize how much people can change things if they are motivated to do it.

That is some very nice writing--thoughtful, full of grace, profound. Well done.

That inauguration picture looks like the Battle of Helm's Deep.