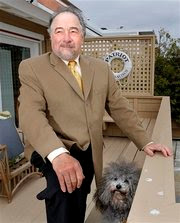 Right wing radio talk guy Michael Savage (real name, Michael Weiner, and not to be confused with the sex columnist Dan Savage, whose real name actually is Dan Savage) is stepping up to the plate to take on another threat to America: Autistic kids. According to Yahoo News, he said: "What do you mean they scream and they're silent? They don't have a father around to tell them, `Don't act like a moron. You'll get nowhere in life. Stop acting like a putz. Straighten up. Act like a man. Don't sit there crying and screaming, you idiot.'"

Comments:
I'd like to get mad about stuff like this, I really would, but Michael Savage is just too ludicrous to elicit any true emotion from me. It's like getting mad at something the crazy homeless guy on the corner is saying-- it's equally as ridiculous and you're not going to accomplish anything by getting outraged. My only comfort lies in the fact that the only audience this guy has is on a medium that will be dead in 10 years tops (AM Radio). He certainly isn't unique or interesting enough to survive in any other medium, so in a short time period we won't have to hear from this guy again.

You mean MICHAEL Savage is a little mixed up?

I agree with Justin t.

Mr Savage is a bozo..

Haha. I'd hate to be autistic in his family! I hope to have an autistic kid one day so I can use the tough love method and yell "act like a man, not a genetic mishap!" By the way, he has a weird looking dog.

I welcome him to spend a week with my sister-in-law. Her oldest son (18) is autistic and her other son (16) is severe ADHD. This is not something I wish on anyone.

Haha, the sex columnist is a much more fun guy to listen to. Dan > Michael. No contest.

I've never heard of him, which shows his pop-culture precedential value is zero.

Yeah . . . I haven't even heard him and still I can't believe someone would say stuff like that in public about autistic kids . . . I know people who are well-adjusted, caring parents (fathers who are just as present as the mothers) who have autistic kids and it's no laughing matter . . . not something you can just cure with a few words.

Justin's right, of course, but on the other hand I think we should get outraged about ridiculous stuff like that and boot this guy off the radio NOW, so that nobody gets any misconceptions about something as serious as autism . . .

so your solution is to get this guy kicked off the radio because he made a comment that offended you?

We have seriously crossed the line when we should get someone fired for exercising his freedom of speech, no matter how ridiculous.

Obviously this guy has an audience (Osler is apparently a listener, he did bring it up of course!), and it's his right to spout as much idiotic drivel as he wants (it doesn't infringe on anyone's rights).
And if there are people that want to listen then so be it, it's his/her right to do so as well.

Unfortunately, "creating misconceptions" isn't enough, in my mind, to stop someone from saying what they want.

Osler, honestly, you upset me a little bit by this. Where were you when some AP hack wrote that Tony Snow should have been buried in a Nazi uniform immediately after Snow's death. Why not bring that out and condemn that writer?

Instead, you start your post by immediately labeling this guy as "right wing" before going into his antics. Who cares about his political leanings? An idiot is an idiot regardless of politics. I'm afraid I will have to start dismissing things you write as part of some liberal agenda to cast all "right wing"-ers as bad, evil people. Why not do it to the "left wing"-ers when they do something equally as despicable?

P.S. While I disagree with Savage, I think his comments may have been taken out of context a little bit. He was only talking about people with mild cases who have the ability to deal with it.

He's a whack job. So are a lot of liberal commentators like Kos.

And if you must listen or read them, take them with huge grains of salt.

Knowing that I am a Republican, someone the Prof. and I know has lectured me on the evils of Rush Limbaugh. I asked him "why do you listen to Rush? I don't."

I'll just point out that no one has "the ability to deal with it" easily. Certainly yelling at them to "shape up" isn't going to help. Mild autism is still a disability and it takes years of intense work for those afflicted to learn how to look someone in the eye when speaking, react appropriately, etc. So I don't believe that it being said in that context is an excuse.

Anyway, the man is clearly a fool, Republican or not. When I hear of people like this, either right-wingers like this or the liberal AP guy Anon. 10:26 mentioned, I just have the urge to stand up and declare, "This person doesn't speak for me - don't put me in the same category as him!" But unfortunately, people only tend to see the extremists on either side of the spectrum and lump them in with us sane people in the middle.

One likable thing about Mr. Savage: that's a helluva dog.

I think we should petition to have Michael Savage replaced by Dan Savage. Imagine if the callers didn't know that, and got Dan's no-nonsense sex advice (which I read in every Onion) instead of their usual ludicrous vitriol.

I can still remember his tirade against a homosexual caller -- Savage called him a pig and wished AIDS on him. I guess I'll just never understand hatred.

I agree Lane, I can't understand hate either. Which is why I'm so confused as to why you want Dan Savage on the radio anymore than Michael Savage.

Speaking about a Green Party candidate in Pennsylvania:

"Carl Romanelli should be dragged behind a pickup truck until there's nothing left but the rope."

"Mr. Romanelli should go f%&k himself."

"Any progressive who votes for a Green anymore after Nader and now Romanelli is a f*#king idiot and should be beaten with sticks."

These are just a couple of examples where he uses foul language (probably because he is not smart enough to come up with a non-crude way to insult these people) and basically indicates that several people or groups of people should be beaten and or killed.

You're right, he would be much better. And it would be hysterical to hear him on the radio...

I'm sure you will excuse all of this, or call it hyperbole, or whatever.

Michael Savage is a moron. So is Dan Savage. So are the vast majority of people we let comment on politics/sports/etc. on TV, newspapers, and radio. Just because you like the leftwing ones because they happen to agree with you doesn't make them any better or any less likely to hate. They just hate the same people you happen to disagree with, so it is easier to stomach.

Anon-- I didn't know about that comment about Tony Snow, and couldn't find a link to it, but that certainly was a terrible thing to say-- just as bad as what Savage said. I identified Savage as a right-wing talk radio guy because that is what he is.

It does make me really sad that so many of the popular people on radio, on both sides, don't really talk about issues in any depth. It's just attack personalities, ad nauseum. Bleh.

That's one reason I really did mourn Tim Russert. He did get down to issues now and then, in a relatively fair and honest way.

Osler, that's because no one reported it outside of FoxNews. This occurrence exemplifies differing agendas among broadcast networks.

I make no apologies for Savage's politics (either one). I read Dan Savage for his sex advice in the back of a humour magazine.

I read Dan Savage for his sex advice in the back of a humour magazine.

Yep. And I pay about as much attention to his admittedly-left-wing-nutjob politics as I do to Tom Hanks', Susan Sarandon's, or any other number of famous people who are famous for something that ain't politics. What makes his opinion any better than, say, mine? Nada.

He's paid to make boner jokes, not comment on politics. That's probably why it only got picked up by a couple news outlets when he said something that wrong.