Sadly, nothing will ever really make GM cool... 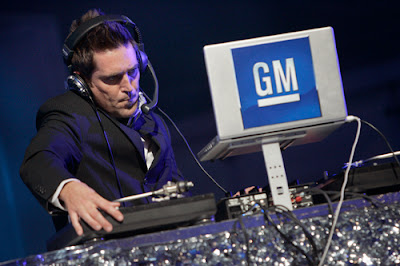 I wish that this was a doctored photo, but sadly it isn't. It's a genuine photo from the North American International Auto Show, which started press previews today in Detroit. When I lived there, this was one of my favorite times of the year. I love cars (a trait shared by most people from Michigan), and it was incredible to simply wander among all the newly-developed designs.

Of course, to get there you had to trudge through a lot of snow and slush. Further, as you traveled the roads to the show you couldn't avoid one simple truth: Auto engineers tend to be terrible drivers.

Comments:
Is that Mitt Romney behind the turntable? Similar hair.

Sheesh, it totally does look like Mitt Romney. I hadn't noticed that, being distracted by the fact that a DJ agreed to a huge "GM" being plastered on his equipment.

I used to love the Auto Show. I still love cars and up until recently I was a subscriber for years to Autoweek. The reason was, I worked for an OEM supplier for 8 years in Mich and they had they lying all over the office. I used to read them at lunch and just got hooked on it.

I do know that of all the automakers foreign and domestic, GM is probably just the least creative out there. I mean In the SUV market maybe they can say they have won, because there are just gozillions of those mammoth Yukons and Tahoes and Suburbans on the road. BUT And I hope I do not offend anyone here, I think you would almost have to be an idiot to buy one. First of all, they cost almost $50K I mean WHO has that much money for a CAR??? Then even if you can afford to pay cash for it OR afford the you know $800 a month payments, it depreciates right away, like all cars but then, THESE cars in particular? It takes like $400 to fill the tank each time!!! \
I mean OKAY I GET IT Like my ex boss, (my most recent ex boss) They have FOUR KIDS, and they also hate Minivans. SO they have a Suburban. With four kids you HAVE to have something like this. Not sure why they hate minivans, but whatever BUT I mean MOST PEOPLE do not need that many seats. AND a Minivan is much more practical for a family. You can hold a lot of People, OR a lot of STUFF or a little of both but it is FLEXIBLE, and slightly better on gas.

GM decides to trash the electric car program which was WORKING by the way, and instead do they have very many hybrids? no. They have FLEX FUEL and I get it, E85 its made of CORN but the fuel costs more Carbon whatever to make!!!

So what do they make into hybrids? FREAKING YUKONS!!! Yeah you can get a YUKON Hybrid that gets an astonishing 23 mpg (OOOH PINCH ME!) AND it costs like $60K. I mean my silly little Toyota gets 33 mpg and its not even a hybrid, and a Toyota Prius, the car I REALLLLY wanted, that gets 60mpg.

Oh and I have heard that GM is coming out with the best kind of car a plug in hybrid called the Chevy VOLT. Great!! FINALLY!! WELCOME ABOARD!!! Wait... not so fast.... ITs going to cost like $90K to buy.


Explain it to me, GM You own like EVERYTHING. YOu must be a smart co. WHY WHY WHY WHY are you sooooo stupid? I do NOT hate all American Car Companies. I am on my second Chrysler van and I love it. Chrysler comes up with the most amazing designs and I know one of those guys from my old job in MICH Trevor Creed and he is brilliant. He designs all of their stuff.

I had two Fords before this and they were both AWESOME cars... REALLLLY reliable.. I mean Gas Pigs, yes but they always ran. FOrd also at least CARES about the consumer you know? I mean when they figured out that women were mostly driving minivans, they got a bunch of women engineers who were also moms to redesign them and add stuff like DVD players and Juicebox holders and stuff like this. It might be lame but at least they are TRYING to respond to their customers.

GM is like I don't know what. It just seems like they sit around and blame Toyota for everything wrong but really they were the company that forced crap on the American Consumer for decades... just real crap, and at least some other companies had enough respect for the consumer to say we Know you want fuel economy. We know you want to be safe, we know you want affordable style, We know that if you only have $20K to buy a car, that you still do not want to drive around looking like a Regional District Manager of Pizza Hut or some kind of nerdy Dale Carnegie grad you know, in some boxy, crappy goofmobile that is Metallic pukey green with an interior similar to an igloo cooler. WHY NOT get a Camry instead of a Buick? WHY NOT get a Honda Accord instead of an Oldsmobile?

GM they are just so freaking weird.

I love cars, car shows, car everything, but GM is pathetic. They still think it's 1965 and no one will buy any import. Well, in our global economy (Didn't they get a copy of The Lexus and the Olive Tree?)people have choices, and if American automakers can't keep up, then they go away like Mastadons. Try decaf, Tyd

GM can make a great car, actually. The problem is that they also make really crappy cars at the same time.

Is that a book? The Lexus and the Olive Tree? I will have to ck it out from the library.

Is that a book? The Lexus and the Olive Tree? I will have to ck it out from the library.

Lexus and the Olive Tree is Thomas Friedman being a spaz. It's a good book, but he way overstates his premise of globalization. It's not nearly as messianic as The World Is Flat, and it's a worthwhile read. Just remember that he's a cheerleader.

Though I did like tyd's rant, mainly because I agree with it. Hybrid SUV's make me unreasonably angry. My Camry is far more fuel efficeint. You're not helping, people. SUV's, as a general rule, are a horribly unreasonable car and pretending it's eco friendly by buying a hybrid just irks me.

And seriously, what is wrong with minivans? I realize it's hardly a cool car, but it has great utility for families. Far more than the SUV.

I also think it looks like Ted Danson . . . but Mitt Romney is even better.

Well Mitt says he's bringing all the jobs back to Michigan, and the Chairman of GM will concede nothing, so it seems they both have tunnel vision or are completely clueless.

(and yes, full disclosure, I am a McCain partisan)

--Ted Danson hasn't had hair that color in years

I think that's Ray Liotta...either that or Henry Hill himself.

That Mitt Romney will do anything to get the Michigan primary vote.