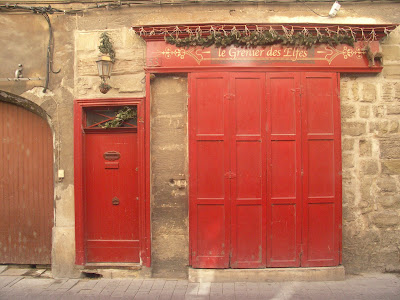 Meanwhile, back in my hometown, the local choir teacher is in big trouble. She is remarkably successful in some respects; her choirs win championships, and many of her students pursue singing careers. Many of her former students really adore her. There is a dark side, though-- she has had a serious history of stepping over the line when she gets angry with them. Over the years, she has sworn at them repeatedly, and thrown things at them at times, according to the newspapers. Most recently, she was convicted of assault after hitting a former student with her car.

I'm still a new teacher, really, and I still have a lot to learn. I am careful who I learn from, though. I really don't want to learn how to teach from that choir teacher. Maybe it is possible to untie the teaching intensity from the destruction, maybe not. But what I don't want any part of is the element of disrespect that seems a part of her actions. It is a tough thing to be demanding and not disrespectful at times, and that balance is one that everyone (including me) struggle with. Nonetheless, I will not choose a role model who does what she did. There are, after all, plenty of others I can look to as an example, many of them even at a demanding place like Baylor Law School where someone like Jim Wren seems to have a wonderful ability to both demand a lot and respect his students.

To learn to teach, you have to choose your heroes wisely.

It's hard, as a teacher, not to let your anger take over sometimes. I have been shocked at myself at the way my temper can flare when dealing with seventeen-year-old kids in class. I'd forgotten the endless variety of annoying things they can do, on purpose, to irritate teachers. Luckily the worst thing I've ever done was kick (figuratively, not literally) a couple of students out of class because they were rolling their eyes at me when we were about to have a serious discussion of classroom discipline. Teaching is one of the most intimate relationships people can have, I think, and thus lends itself to the same irritations you'd get in a family setting.

Like most parents, though, I think that most teachers, including the Professor, have a pretty solid internal meter on how to treat students with respect, and the Grosse Pointe choir lady unfortunately didn't. It's kind of amazing she got away with her behavior for so long.

I too read the GP News Online. I mean i have to keep up , you know?

I read about this and I was shocked. I'll bet it is hard to be a teacher and hard to be a student with all the pressures kids face these days. Having said that, there is NO PLACE for this kind of behavior in or out of the classroom. Grosse Pointe is a pretty hard to please community and they demand a lot from their schools, stores, city leaders etc. It is a nice place to live and I think the people who like living there want to keep with that way.

Anyway I am surprised she was allowed to get away with it for so long... If a store owner or someone acted like that in GP, pretty soon they would be out of business. I have clear memories of like a new business opening up in GP and going in there and having them be kind of snippy and you know in 6 months they were gone.

I am NOT surprised in made Page 1 of the GP News though.... this is the biggest story since Kathy Du Ross married Hank the Deuce.