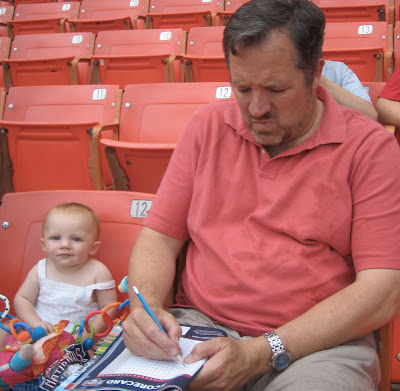 I have to say, I'm pretty impressed with IPLawBaby. She is an incredibly good-natured child. She only cried once the whole time I was there, and then only for a little while (when she was hit in the arm during a DC drive-by shooting). She seemed very content at the baseball game, and even drank enthusiastically out of a Washington Nationals bottle. She now knows three words: "Up," "dog," and "infringement," though she has not yet strung them into a sentence.

Comments:
Is that Poseur sitting next to IPLawBaby?

Yes. It was quite a weekend. There's a long story there.

Right after I bought my first time machine. That is Poseur in twenty years... scoring a baseball game and ignoring a baby.

And what is up with the declining quality of drive-by shotings in DC? There was a day when they would have circled back and gotten the head shot. IPLawBaby's got to learn to duck and cover.

The Razor children are steadily increasing in number: Spencer, Donut (who I must assume is a child), Mamie Von iplawbaby, and Miles.

Iplawbaby whacked the shooter with her a high hard bottle shot to the head. Pretty awesome in both accuracy and velocity. Next thing we knew, Jim Bowden tried to put her in the Nats' bullpen.

Iplawwife, however, is training young Mamie Eisenhower Iplawbaby to take lefthanded jumpshots, so the Nats may lose her to the WNBA

Donut is an imaginary child but he causes so many problems for everyone in the world that he seems real.

Neither does Iplawife, and she's been known to knock grown men into shrubbery during pickup basketball games. Both my brothers played starting Center at our high school. Then I went and married a woman who was the Captain of her High School's State Champion team. This kid is going to end up playing a lot of basketball.

That is one gorgeous little girl!