Correction! Oops on the photo... 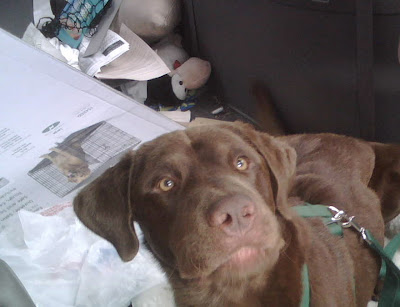 It appears that due to a poor job of cropping the photo Tyd sent me, in the last post I identified a stuffed "Opus The Penguin" as her new dog. Sorry about that. A fuller view of the photo, shown above, shows not only that penguin, but the real Booger the dog, who now gets to live with Tydwbleach and Tyd2Bleach and Spencer and Donut in their minivan. The name "Booger," of course, is a sly reference to a character in Revenge of the Nerds played by fellow Detroiter Curtis Armstrong. Michigan, represent! Yeah!

The whole Tyd-House-Explosion saga deserves a tv series, I think.

Boogie was named for a dog that Bill once knew and loved, a German Shepherd mix that was owned by John lee Hooker.

But you know probably the kids at school ARE going to call him BOOGER.... BUT that is okay because Spencer thinks that is an extremely funny word, and also, Boogie is friends with DONUT....

So this is the third music inspired naming of our dogs, and I also had a siamese cat named LOUIS (Armstrong)

First dog was very goofy and Bill thinks banjo players are goofy so he called her BANJO.

Then Riley was named after BB King, as that is his middle name.

And now Boogie the Dawg.

Weird but still better than Winnie the Pooh or Max, or MY FIRST choice, which was to name him Nigel.

Riley King was known as the Beale Steet "Blues Boy" in his early days around Memphis. B.B. is the abbreviation of this "Blues Boy" moniker.

If you named him Nigel, everyone would sing "We're Only Making Plans for Nigel."

Everyone who had ever heard of XTC, that is.

Did I see iplawbaby on Channel 4's 11:00 news on Saturday? They showed a smiling baby which sure looked a lot like the photo Osler posted a few days ago...If not, then iplawbaby's long-lost identical twin is stalking her at RFK.

DId you know that Spencer's name... if Bill had his way would have been JAMES MARSHALL???

and also after the Amp co. and some photographer...

But then we thought better of it... Or uh I said that I did not like the name Jimi or Jim or James

We considered Miles, of course but practically every musician has a kid or pet named Miles.


I am just glad Bill favorite musician was not Bootsie Collins.

We were at the Stadium on Saturday afternoon (love the 4 pm start time), but I don't recall a camera being trained on little Mamie E. Iplawbaby that day. It's happened before. She invariably falls asleep in my arms during rallies, so I have to sit there and say "yay," or "good play," when I'd rather be on my feet screaming like a loon.

So unless it was a shot from faraway camera, it was most likely some other kid.

This cutie was mugging for the camera, so I guess it wasn't little Mamie...spitting image, though.